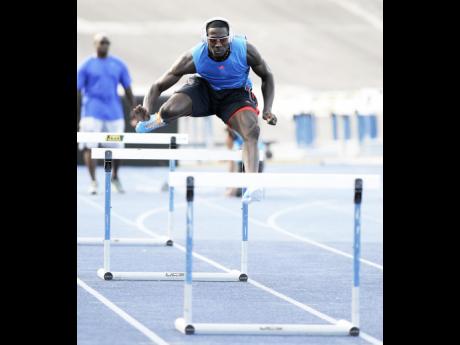 Competing at his fifth World Championships, Jamaican 400m hurdler Leford Green is hoping to turn what has been a tough year on the personal and professional level into a positive close

Green, a two-time World Championships finalist, returned to Jamaica to pair his Lennox Graham-led hurdling programme with the 400m expertise of Bertland Cameron, but it wasn't always an easy transition.

The hurdler had to make personal sacrifices and had to learn entirely new approaches but now looks back at his decision in a positive light, considering that the main objective, qualifying for the World Championships, had been met.

However, the Olympic finalist is now looking to reap more successes. Though his 49.22 season's best leaves him a full second behind the top contenders in his event, Green is confident his best performance is yet to come.

"I'm pleased to have been selected to compete at another World Championships, I'm feeling good and I'm happy to be here to represent Jamaica and myself," he said.

"It's really been a tough and trying year for me and I think I have been resilient in my efforts to keep it together. I also have a lot of people in my corner to help me stay focused and motivated so I am owe a lot to the folks who have been there for me supporting me. My family has always been there, good friends, Jason Morgan, Dane Hyatt, Jermaine Gonzales and even coaches like Bertland Cameron and Lennox Graham, who were always there. I think I have accomplished a lot just by being here at the World Championships, which is a goal of every athlete," Green continued.

Well aware of the deficit that he will need to erase if he is to make the final, moreso contend for a medal, Green remained unfazed, underlining his focus on executing his coach's instructions, which he expects will bring positive results for him.

"Anything can happen and I'm just here, really excited to see what's going to happen tomorrow (today)," he said.

"I'm just trying to focus on my execution because, as I have said, it's been a tough year and I have been trying different stuff to see what works or what can get me into a better shape and state, so its all about execution and that's my focus going into these championships and, hopefully, the time will come. I'm looking forward to it, hopefully the crowd in the Bird's Nest can also bring me alive and I can get some success," he added.

The men's 400m hurdles heats will get unde way at 6:10am today. He will be joined by fellow Jamaicans Annsert White, the national champion, and Roxroy Cato.