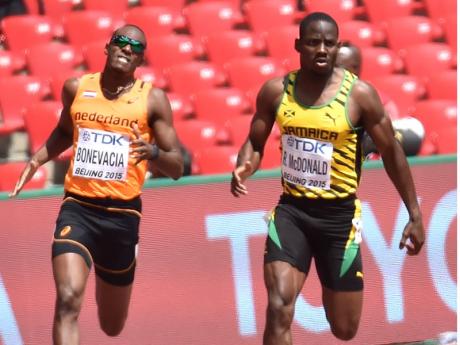 Ricardo Makyn
McDonald ... I'm really surprised about this time I didn't expect to go this fast. I didn't follow the coach's instructions so I could have gone even faster," he said.

Rusheen McDonald smashed the national 400m record inside the China's Bird's Nest Stadium clocking 43.93 in the heats to place second in a photo finish and secure his spot in the semi-finals set for Monday at 7:05 a.m.

But the Jamaican said he could have gone even faster.

"I'm really surprised about this time I didn't expect to go this fast. I didn't follow the coach's instructions so I could have gone even faster," he said.

"I'm really confident. No one is unbeatable, everyone is human."

McDonald, who was awarded the same time as the winner Yousef Ahmed Masrahi of Saudi Arabia, eclipsed Jermaine Gonzales’ old mark of 44.40 set back in 2010.

His Jamaican teammate Javon Francis who has also qualified for the semis was elated.

"I'm really happy for Rusheen and I hope he stays injury free and have a great championships. I'm happy with my execution and I'm looking forward to the next rounds," Francis said.

Francis, the national champion guaranteed his passage after placing second in his heat with a time of 44.83.

America's LaShawn Merritt was first in 44.51.

Jamaica’s other representative in the event, Peter Matthews, ran a new personal best of 44.69 to take fourth in his heat.

His time was good enough to see him through as one of the fastest losers.

Grenada’s Kirani James was smooth as he also secured his place in the quarter mile semis winning his heat in 44.56.