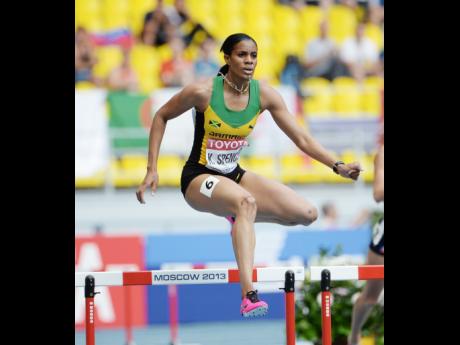 Kaliese Spencer, Janieve Russell, Shevon Stoddart and Ristananna Tracey will take to the track in the heats of the women’s 400m hurdles at 9:25 p.m.

Spencer will run out of lane three in heat one, as she seeks to book her place in the semi-final and move a step closer to her first international senior outdoor medal having enjoyed immense success on the Diamond League circuit in recent years.

Spencer comes in with a season best of 54.15 making her the seventh fastest so far this year having run the event sparingly following a minor injury in June which was further aggravated at the national senior trials.

Racers Track Club athlete , Tracey, will be next up in heat three, also running out of lane three.

The 23-year-old comes in with a season best of 55.45 which she recorded in her third-place finish at the national senior trials.

Meanwhile, Stoddart will look to progress from heat four running out of lane seven.

Her season best of 55.29 also came at the trials where she placed second.

National champion Russell will face the starters in lane eight, in the fifth and final heat.

The The MVP athlete, who has a season best of 54.83, will have among her contenders, world leader Shamier Little (53.74) of the USA.