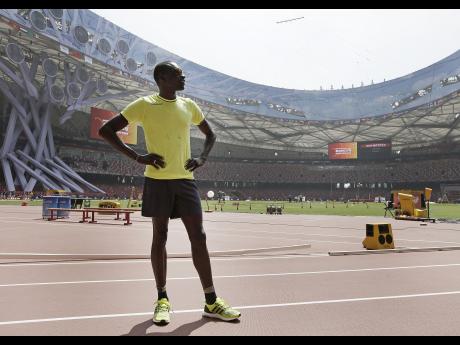 AP
Kenya's David Rudisha posing for a photograph at the Bird's Nest Stadium in Beijing, China, on Thursday.

Since beating Botswana's Nigel Amos to the 800 metres gold medal at the 2012 Olympic Games in London, Kenyan star David Rudisha has been looking at his rival's heel whenever they meet.

Amos has beaten Rudisha in each of their last six races since the Olympics final, but the world record holder, who admitted that it's the Botswana youngster who comes into the World Championships as the man to beat, insists that there is no psychological disadvantage despite Amos' streak of wins over him.

The men's 800m is certainly one of the must-see events in Beijing with Rudisha and Amos providing just two perspectives to a potential thriller that should also include Ayanleh Souleiman, who has also been impressive this season.

"I think this rivalry is very good and very healthy. This year in the 800m, nobody is unbeaten so it's going to be one of the exciting races here, and Amos is the favourite for this World Championships and that will take a bit of pressure off myself but I'm really looking forward to it," Rudisha told The Gleaner.

"He has no psychological advantage over me, though," he added. "I am tough, psycho-logically. Over the years, I have been building that and I know the reasons why I have been struggling is because I was coming back from the injury. It was a career-threatening injury, so, for me, to be back was a big thing, and now I had to work my way back, I knew there would be challenges."

Glad to be back

Rudisha says he is happy to be back in Beijing and reported that he has been spending a lot of time in recent weeks doing speed work, which he expects will add to his arsenal, as he looks to wrestle control of the event he once dominated.

"I'm happy to be back here in Beijing for these World Championships and I'm really looking forward to it," he said.

"We have been doing good training, I've had some good sessions and we were aiming to peak at this time, and I've done quite a lot in mileage and the only part that was remaining was speed, and that's what I have been working on over the past few weeks," said Rudisha.

"The response has been very good, I have been having some impressive sessions and I'm excited about it."