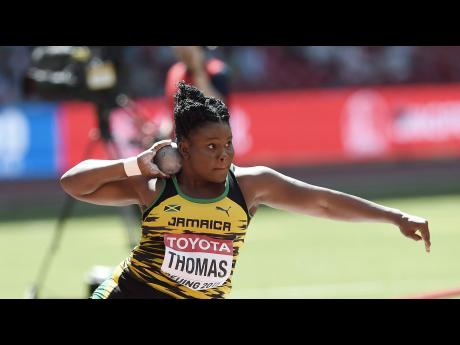 Already playing her role in history as Jamaica's first female representative in the shot put at the World Championships, the former Edwin Allen student, now at Kent State University, says she that all she has gained from the experience has far outweighed her disappointment, after her 16.62m only gave her 12th place in Group A qualifying as she missed out on a spot in the final.

"For the first time, I would say it was a great experience for me," said Thomas. "It has boosted my confidence. "I'm the first female shot putter for Jamaica to ever compete at the World Championships, so it's a privilege for me."

"It has given me an eye-opener and it's going to give me the motivation to train harder to ensure that I qualify for the Olympics next year," she added.

Thomas, who also competed at last year's Commonwealth Games in Glasgow, says she is hoping to continue flying the flag for Jamaica's female throwers and is hoping that she can become an influence for youngsters who are looking to get involved with throwing events.

The 22 year-old only registered one legal mark after fouling on her first and third throws.