Weir can pull off another surprise 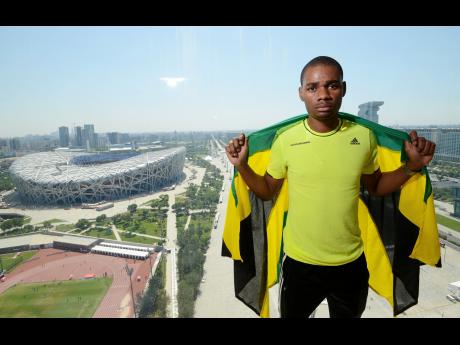 Ricardo Makyn
Warren Weir in Beijing, China, yesterday with the Bird's Nest Stadium in the background at left.

Warren Weir is no stranger to pulling a surprise.

In 2012, not many persons expected him to make Jamaica's team to the Olympic Games in London much less win a bronze medal in the 200m there. He would later show it was no fluke with a silver medal upgrade at the World Championships in Moscow a year later.

Two years later, Weir again finds himself in a position where not much is really expected of him, but, according to the 25-year-old sprinter, that's just the way he likes it.

To be fair, Weir has not had the best of seasons so far and, in fact, last year wasn't exactly anything to shout about either. In fact, the sprinter has only posted one sub-20 seconds time in the 200m since the start of last season and has not looked anything close to his 19.79 seconds calibre.

Nonetheless, Weir says he is not too bothered with his form coming into these championships and revels in the opportunity to again prove his doubters wrong, as he gears up to compete at the 2015 World Championships in Beijing, China.

"Whenever there is doubt towards me, it gives a platform to prove them wrong, and that gives you a boost and an energy to strive towards that, and I have definitely been proving people wrong since day one," said Weir yesterday. "I'm just looking forward to the competition and to putting together a good performance for myself and my country.

"I am a tough individual. I am very focused and it doesn't matter what's happening around me, I will definitely go for what is out there and I wont let any other person's times get me scared. I always do my best and try to get on the podium," added a defiant Weir.

The sprinter pointed to a knee issue after the Commonwealth Games last year and another setback ahead of this year's New York Diamond League as reasons for his flat months but believes he has enough in him to make an impression inside the Bird's Nest.

"It's not so much of a concern because it's not like I had only one sub-20 time while being injury free. I have had a lot of injuries so I'm not worried about it. I know when everything is fixed we will see a lot more sub-20s," Weir said. "I'd like to think that I am at a good enough place where I can go out there and put on a wonderful performance after a long season ... . It has been a bittersweet season, but I'm sticking there."

Weir may not always get the respect he deserves, but in times of trouble he almost always seem to answer all the questions around him.

"Respect is earned, but sometimes even when you deserve it a lot of people don't show you that respect. I know that I am respected in some areas of the sport so I'm good with that. Respect is being shown from the people who need to show it," said Weir.

Another medal at a major championships will not only again defy the odds, but may also take his respect to greater heights.