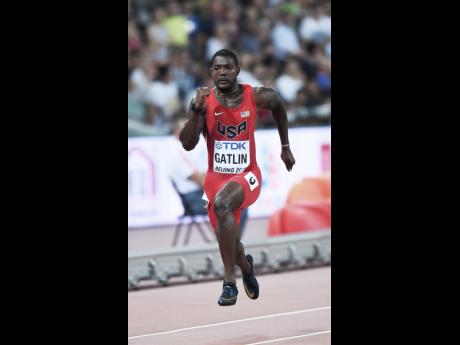 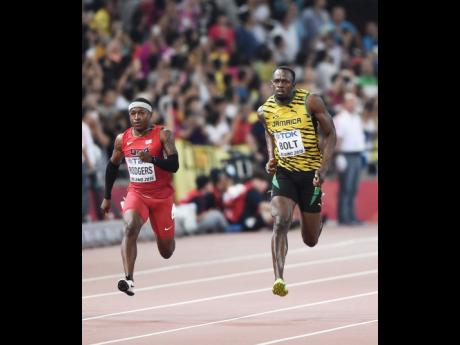 Ricardo Makyn
Usain Bolt (right) in full flight as the American Mike Rodgers huffs and puffs his way into second.
1
2

Sprint king Usain Bolt will lead the Jamaican trio completed by Asafa Powell and Nickel Ashmeade into the semi-finals of the men's 100 metres with one eye locked on the final a couple hours later as the IAAF World Championships in Beijing, China kicks into high gear.

Bolt and Powell were both comfortable in winning their respective heats with the other main players Americans Justin Gatlin - now unbeaten in 30 consecutive races - and Tyson Gay, also easing to victories in the opening round of the marquee event.

Jamaicans have won five of the nine available medals in the men's 100 metres since the 2009 World Championships in Berlin and have won the gold medal at each event since then.

There is a real threat that this streak will be broken this time around with Gatlin showing the type of form he has for the past two seasons.

The world leader looked ominous, advancing as the fastest qualifier after he stopped the clock at 9.83 seconds to win his heat, even if there was an illegal +2.1 metres per second wind pushing him along.

Bolt, who says he is fit and ready to run fast, shows why his handlers have become so confident that he will retain his title over the past few weeks, nonchalantly winning his heat in 9.96 (-0.2) with Powell, 9.95 and Gay, 10.11 also keeping a lot in the reserve tank ahead of today's expected double assignment.

In yesterday's men's 400m hurdles action, the Jamaican pair of Annsert Whyte - the national champion - and Leford Green booked their spots in today's semi-final round, where they, too, will be looking to qualify for the final set for Tuesday.

Roxroy Cato struggled to get going and never looked comfortable from the beginning in the end and finished sixth in his heat with a time of 49.47.

The event was won by Kenya's Nicholas Bett in 48.37 seconds ahead of Russia's Timofet Chalyy, 49.05 with Jeffery Gibson of The Bahamas taking third place in 49.09.

Leford Green 49.33 had a nervous wait to see if he made it through as one of the fastest athletes outside of the automatic spots and couldn't contain his excitement as he booked his spot after an aggressive run in his heat.

Green took on the entire field from the sound of the gun, but faded towards the end with his legs getting heavier with each stride as he crossed the line in fifth position behind winner Boniface Mucheru Tumuti, 48.79, also of Kenya; Michael Tinsley (USA), 48.91, and and Puerto Rico's Javier Culson, 49.02.

"I tried a new strategy here in this race. I decided I was going to attack the race, run aggressively from the first hurdle, and it's a strategy that I will be using as I go through the rounds," explained Green.

Despite a early scare in his event when he clipped the second hurdle and lost some momentum, national champion Annsert Whyte was the most impressive Jamaican of the lot and was relatively comfortable in crossing the line fourth with a time of 49.10 to claim an automatic spot to the next round.

Kerron Clement (USA) in 48.75 was the first athlete to finish the race with Great Britain's Niall Flannery, 48.90 and Kariem Hussein (Switzerland), 49.08 taking the top-three spots.

There were a couple of high-profile casualties in the events as world leader and gold medal favourite, American Bershawn Jackson, 50.14, who finished seventh in his heat, and defending champion Jehue Gordon of Trinidad and Tobago, also seventh in his heat in a time of 49.91. Both failed to advance in the event.

Danniel Thomas became Jamaica's first World Championships representative in the women's shot put, but she had to settle with a 12th-place finish in her qualifier and a mark of 16.62m, which was sandwiched between two fouls.

There was success for Jamaica's female triple jumpers, with Kimberly Williams and Shanieka Thomas both qualifying for Monday's final. Williams was third in her qualifying group with a 14.23m effort with Thomas finishing fourth with a mark of 14.05m.