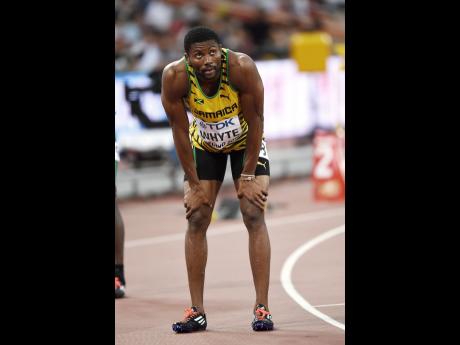 File
Annsert Whyte after his fourth place finish in his 400 metres hurdles heat at the IAAF World Championships in Beijing yesterday.

National 400m hurdles champion Annsert Whyte may have booked his spot to today's semi-finals of the men's 400m hurdles at the IAAF World Championships inside the Bird's Nest in Beijing, China, but he was far from happy with his performance.

Whyte, clipped the second hurdle but managed to hold it together to post 49.10 seconds to finish fourth as one of the automatic qualifiers for the semi-finals, which take place at 5:40 a.m. and will no doubt be keeping an eye on Tuesday's final.

Disappointment aside, Whyte who came into this championship after back-to-back sub-49 seconds clockings, says he is excited and proud about advancing to the next round and is willing to back himself, once he gets there.

Whyte was solid out of the blocks but had some issues on the backstretch before he was able to gather himself and come across the line with what was a decent run in the end.

He does, however, know that he will make a much improved performance in the next round if he is to achieve his objective to make the medal round.

"I'm not really pleased with the execution, but I am pleased with the time. I am glad that I am through to the semi-finals, and I just want to come here tomorrow and see how it goes," Whyte said.

Whyte explained his points of concerns but was clear in his ambitions here in Beijing.

"The second hurdle; when I went out, I started well but when I got to the second flight I hit it and it kind of threw me off my rhythm. But, I was able to keep my composure and maintain it through to the end," Whyte said.

"I need to run the backstretch a little smoother and faster as well but to tell the honest truth, I want to come here and get a PR and make it to the final and then see what happens," added Whyte.