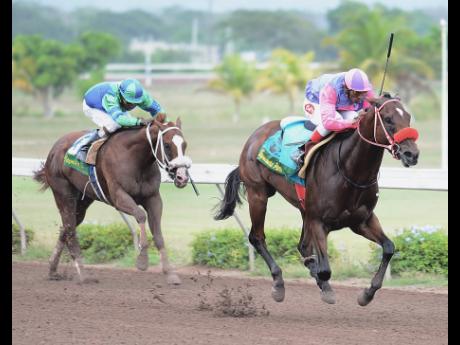 Installed a 4-5 favourite with veteran jockey Ian Spence riding for 14-time champion trainer Philip Feanny, BUZZ NIGHTMARE broke smartly from the number-nine post position, but was soon joined on the inside by 2-1 second favourite, ROAD WI SEH, in the 10-horse field.

But with Spence having a lot in hand, BUZZ was merely toying with ROAD WI SEH and opened up, leaving the half mile to turn for home two lengths clear of the ever-present ROYAL ASSAULT under title-chasing jockey Shane Ellis.

Thereafter, BUZZ NIGHTMARE only had to be kept up to his work under the left hand stick from his 49-year-old jockey, beating ROYAL ASSAULT and the late-closing WINGS OF HOPE (24-1).

Owned by 2 Penyu and bred by HAM Stables Limited, BUZZ NIGHTMARE was notching his fourth win from only five career starts and achieved the victory in yet another fast time - 1:19.2 behind splits of 23.1, 46.3 and 1:11.4 for the first 1200 metres.

Spence said he simply did the basics ... broke him sharply, rated him on the lead and his class did the rest.

"From then, I knew he had a touch of class, and this manifested itself today ... He's better than these horses and with further scope for improvement, I expect him to go far in racing," added Spence, who is popularly called 'Dolly Baby'.

With the top three riders vying for the championship having a lean day, Robert Halledeen seized the opportunity to inch ahead in the title race after the Wayne DaCosta-trained MISS JUANITA (9-2) was awarded the eighth race for overnight horses on the disqualification of 9-1 chance BOLD AVIATOR, who won in a blanket finish with Aaron Chatrie aboard.

Halledeen now leads with 51 wins, one ahead of Ellis and two ahead of Omar Walker, both of whom failed to ride a winner.

Apprentice Renardo McNaughton stole the spotlight with two winners - MARKOFAPRINCE (9-5) and the 30-1 outsider, COOL U BOOTS, in the closing race.