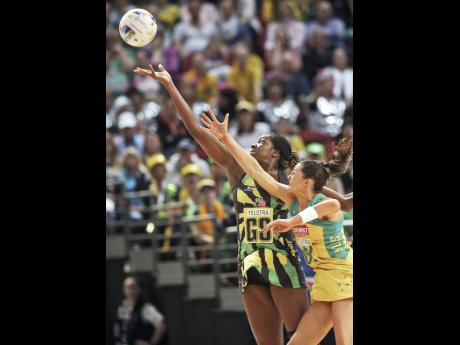 AP
Jamaica's Jhaniele Fowler-Reid in action for the Sunshine Girls against Australia at the recent Netball World Cup in Sydney, Australia.

THE Mico University College has strengthened its netball programme for the upcoming season.

One of the country's most talented netballers, national goal shooter Jhanielle Fowler-Reid, has enrolled at that institution for the upcoming academic year. Fowler-Reid who returned to the island recently from the Netball World Cup in Australia will be pursuing a bachelor's degree in guidance and counselling.

Fowler-Reid will team up with two members of the team who were in Australia - goal defence Vangelee Williams and centre Nicole Dixon. Assistant coach of the Sunshine Girls, Annette Daley, is the head coach of the Mico University team.

Fowler-Reid who plays for Southern Steel in the ANZ Netball Championships in Australia will add vast experience to a Mico team which has been very consistent in intercollegiate netball for the past six years.

Fowler-Reid was delighted about the chance to pursue her degree and playing netball at the Mico.

"I am more than overjoyed to know that I will be attending this beautiful and great institution to do my degree in guidance and counselling and also knowing that the Mico family has embraced me," she said.

WON'T FEEL OUT OF PLACE

"The Mico institution itself will not be strange to me as I have had several training sessions there and a few of my teammates at the national level are on the Mico team and I won't feel out of place," she added.

Fowler-Reid will still turn out for the Southern Steel in the ANZ Netball Championship while enrolled at Mico.

"When I am overseas I will be able to study online and there are persons both here and overseas who will be willing to help me," said Fowler-Reid when asked how her overseas engagements will affect her studies at Mico.