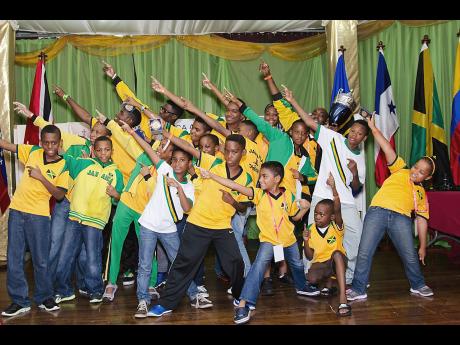 Contributed
Courtesy of ViewPoint Photography, T&T: Members of Jamaica's team to the recently concluded Central American and Caribbean Youth Chess Festival held in Trinidad and Tobago between August 14 and 19.

In doing so, Jamaica became the first English-speaking country to win this prestigious annual chess tournament.

The tournament featured more that 180 players, aged seven to 17, from 14 countries who share the Caribbean Sea, including Colombia and Venezuela. Jamaica accumulated the most points from the final positions of its players after nine gruelling and closely fought rounds. Top-five finishes in each of the nine sections contributed to the country's cumulative points tally. In second place were Colombia followed by hosts Trinidad and Tobago.

In the Under-8 female category Jamaica's Jaya-Rene Richards finished third and in the Under-8 Absolute category, Anthony Lyn and Kishan Clarke of Jamaica were third and fourth respectively, behind Rayden Rampersad of Trinidad and Ashly Carolina of Venezuela who topped the section.

In the Under-10 female category, Jamaica's Johmoi Blake was fifth and in the Under- 10 Absolute category, David Thomas placed first ahead of Leigh Sandiford of Barbados, David Ramirez of Colombia and Mikhail Bond of Jamaica who were second, third and fourth, respectively.

In the Under-16 category, Women's Fide Master Rachel Miller finished first in the Female section and second in the Absolute section.

Due to their top-three finishes, Anthony Lyn, David Thomas, Leighton Barrett, Adani Clarke and Rachel Miller are expected to be awarded with the Candidate Master title by FIDE, the world governing body of chess. This would represent the highest number of such titles to be awarded to Jamaican players from a single tournament.

Jamaica's participation was made possible by the Kasparov Chess Foundation, the Jamaica Chess Federation, Glen Christian, contributions from parents of representatives and the Trinidad and Tobago Chess Federation.