Tony Becca: No sunshine in Sydney 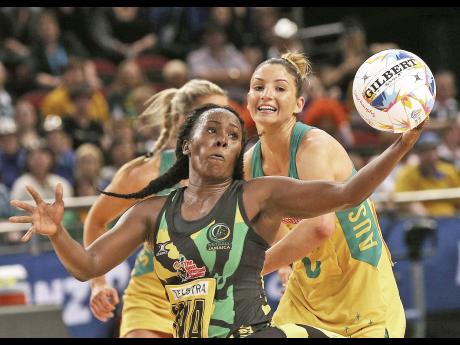 AP
Jamaica's Sasher-Gaye Henry in action against Australia during their Netball World Cup semi-final match in Sydney, Australia on August 15.

Australia were once again crowned champions at the Netball World Cup which ended in Sydney last week when they defeated New Zealand in an exciting, final match.

In netball, for the time being at least, there are two teams which play for the championship of the world, and they are neighbours Australia and New Zealand.

The only other successful teams, finalists, have been England and South Africa, who finished in second place on one occasion each.

Trinidad and Tobago, once the darlings from the Caribbean, have fallen behind recently, but the Sunshine Girls, three times bronze medal winners, have risen to almost take their place, so much so that they have been rubbing shoulders with England while winning the bronze medal on three wonderful occasions.

After getting the better of England on a number of occasions, however, including at the Commonwealth Games last year in Glasgow, Jamaica went to the championships bubbling with confidence that they would have gone even further.

The aim this time was not only to beat England and cop the bronze, which they lost last time, to England, but also to match shots with New Zealand and Australia, and possibly take home the silver or gold by defeating one or the other or probably both teams in the all-important semi-finals and final.

That was a tall order. It was almost an impossible dream. But what with Usain Bolt and Shelly-Ann Fraser-Pryce, and the many young Jamaicans who are burning up the track and leaving the world behind, and Alia Atkinson gliding away in the water; what with the Reggae Boyz' encouraging performance at the Copa America and at the Gold Cup? No one would dare attempt to cool their ambitions a little, lest he or she be run out of town.

Jamaica, despite being pushed to the hilt by Malawi, defeated every other team they played in the preliminaries, all the teams except New Zealand and England, before losing to Australia in the semi-finals and again to England in the bronze-medal match.

The World Cup of Netball, at least for now, belongs entirely and exclusively to Australia and New Zealand. The big matches, more often than not, are between those two teams, with the possible exception of matches involving Australia, New Zealand, England, and Jamaica.

Netball, in fact, could easily be divided into five groups: Australia and New Zealand; England and Jamaica; South Africa and Malawi; possibly Wales, Trinidad and Tobago; and then Fiji and Samoa, and then the rest.

Jamaica is good, no doubt about that. Jamaica has some good, top-class players, but they are too few to match those of Australia, or New Zealand, or even England; not so much whenever they are practicing, but whenever they are fully prepared and ready to play in a truly competitive atmosphere.

On top of that, teams like Jamaica lack the funding, consistently, to properly prepare for a world championship - to set up a system of development, to get a proper league going, a league to fully test the players' fitness and skill, a league to test the player's commitment to be the best, a league which can serve the players' financial needs, and last but not least, to provide regular and good coaching.

Playing a match calls for playing more than a quarter, or a half.

A country like Jamaica can find one, or two, or three truly talented players every now and again, but it is difficult to find 10, 15, 20, 30, 40, 50 players of the fitness, skill, and dedication necessary to play a good, tough, competitive league and to field a squad of world championship winning players.

Players like Romelda Aiken, Jhaniele Fowler-Reid, and Nicole Aiken-Pinnock, like Grace Beckford, Connie Francis, Elaine Davis, Simone Forbes, Patricia McDonald, and Oberon Pitterson before them, are good, and they are probably as good as any player in the world.

Like some players from South Africa and Malawi, however, some Jamaican players hone their skills in a foreign country, in the ANZ Championship, they gain experience by doing so, they play on teams with more good players, and on a match day, in a competitive match, playing for Jamaica, they seldom find others on the team to support them, especially in a tight spot.

Tough luck, Jamaica. Maybe it was not warm enough for the Sunshine Girls to shine in Sydney. The fact remains, however, that to win the World Championship of 2015 was a bridge too far, and the dream too unrealistic.

Bolt, Fraser-Pryce, Atkinson and company do their thing in an individual sport, and the Reggae Boyz are mostly a foreign- based aggregation playing in foreign countries, under foreign coaches. The time for netball will come, or in time, it may come one day.

As a team, however, the Sunshine Girls need more travelling girls like Aiken and Fowler-Reid, either that or, if Jamaica can afford it, they need enough money to make the sport a truly professional entity, one in which the girls can train often, play netball regularly, and live comfortably.

Regardless of what happens, Jamaica must aim for the sky. At the same time, however, probably because of their size, they must count their blessings.

Although the Sunshine Girls remained where they were and did not win the tournament, and in spite of the hype going into the tournament, Jamaica finished ahead of teams like South Africa, Malawi, and Trinidad and Tobago, Scotland, and Wales once again and only behind only Australia, New Zealand, and England, teams which are more equipped to provide things like better facilities, strong leagues, and better coaching, things that lead to development.

Maybe it was, however, especially against England, as so often happens in sport, and as captain Aiken-Pinnock said on her return home, this time "things just did not go our way".