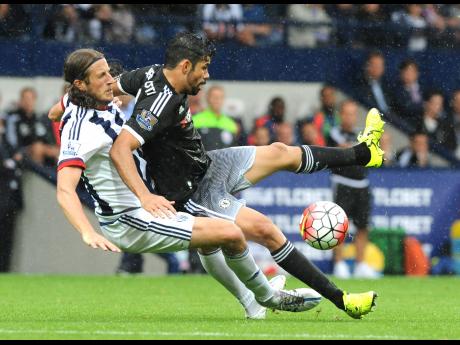 second win in three games in the Barclays Premier League, thanks to a dramatic late winner from Bakary Sako on his debut. Palace went ahead from Scott Dann before Villa levelled when Eagles defender Pape Souare deflected the ball into his own net after Adama Traore's run. An error by Villa defender Jordan Amavi allowed Sako to steal a winner.

Leicester went top of the Barclays Premier League on Saturday, thanks to Riyad Mahrez's fourth goal of the season, quickly cancelling Tottenham's opener. Tottenham opened the scoring after nine minutes through Dele Alli. Mahrez, who had earlier hit the post, replied just 90 seconds later with a fierce left-footed finish.

Manchester United's perfect start to the season ended as Newcastle United produced a battling display to secure their second point of the campaign. Wayne Rooney had a goal ruled out for offside as Louis van Gaal's United made a blistering start before Newcastle's Aleksandar Mitrovic headed against the United bar.

Sunderland have a habit of failing to win when going behind; Saturday's stalemate was the 18th time in the Barclays Premier League that they have failed to win after letting in

the first goal. However, Sunderland striker Jermain Defoe's equaliser earned his side their first point of the season after Bafetimbi Gomis shot Swansea ahead.

AFC Bournemouth celebrated a first-ever win in the Barclays Premier League as Callum Wilson became only the fifth player in the competition's history to score an away hat-trick for a newly promoted side. Wilson scored twice in the first half with first-time finishes before Mark Noble scored a penalty for West Ham and Cheikhou Kouyate levelled. Marc Pugh put the Cherries ahead. Wilson scored a penalty, with Carl Jenkinson sent off, before Modibo Maiga ensured a tense finale.