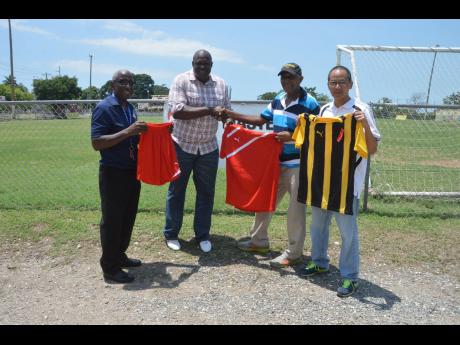 Organisations such as Friends of Football, Masters and Celebrities and World Sports International teamed up to contribute football gear to Barbican FC and Boys' Town FC during a brief handing over ceremony at Barbican Complex last Friday.

Also involved in the sponsorship of the gear were musicians Dean Fraser, Sly Dunbar and Robbie Shakespeare, as well as Lloyd Plummer of England.

In making the handing-over to the clubs, organiser Clive 'Busy' Campbell said it is a continuation of their generosity to the sport.

"We have always contributed gear to Boys' Town, and following a promise last year, we also included Barbican. We have made the contribution to the clubs because they need it more than some other clubs," Campbell told The Gleaner.

"Because of the economic situation in the country, the support is not great at the club level. We need to do what we can to help the sport, so our organisation will continue to do what we can," he added.

"We're very elated. They have been doing it for several years. A set of gear cost approximately $150,000, and this helps us a lot. They have always supported us and we truly appreciate that," Price said.