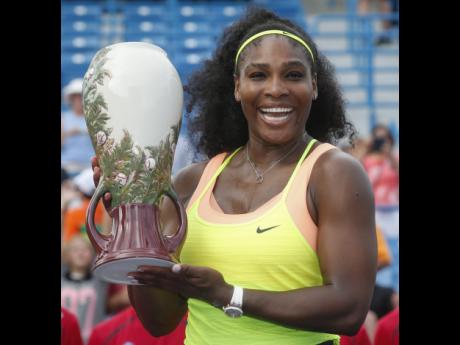 Roger Federer jutted his right index finger toward the summer-blue sky to celebrate his latest Cincinnati title. He would have needed both hands to count all of them.

Might as well just rename it the Federer Open. Or maybe subtitle it the Djokovic Heartbreak.

Federer remained perfect in Cincinnati finals, winning an unprecedented seventh championship yesterday, while denying Novak Djokovic the one title that always eludes him. Federer never faced a break point during a 7-6 (1), 6-3 victory at the Western and Southern Open.

Serena Williams got her name on the Rookwood trophy for the second time, beating third-seeded Simona Halep 6-3, 7-6 (5) for back-to-back Cincinnati titles. She heads off to the US Open trying to become the first player since Steffi Graf in 1988 to pull off a calendar Grand Slam sweep.

"I'm ready," Williams said. "I don't care if I win or lose or break-even. I'm ready to start it, get it over with and be done, and go on to the next event, but I'm so ready for New York. Let's go, right?"

It took Williams six tries before she got her first Cincinnati title. Federer has never failed.

The Swiss star is 7-0 in the finals, which always brings out the best in him. He loves the fast-playing courts and the small-town atmosphere in suburban Cincinnati heading into the big-city pressure of the US Open.

"I don't know how many years I can come back, but I'll try my best to be here many more years to come," Federer said.

No surprise there. Federer is the undisputed king of this court.

By contrast, the world's top-ranked player is 0-5 in Cincinnati championship matches, never winning so much as one set. Djokovic covets the title - the only one he needs to become the first to win all nine of the current ATP Masters events.

"The fifth time I've been in the title (match) and never won this title, so I guess I have to wait for Roger to retire," Djokovic said. "I've been coming back each year wanting it more."