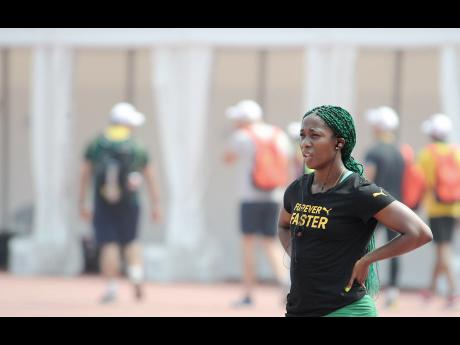 Ricardo Makyn
Fraser-Pryce comes into the championships with a season best of 10.74 with her eyes set on lowering her 10.70 personal best which is the national record.

Defending world champion, Shelly-Ann Fraser Pryce, will look to move one step closer to history when she contests the women’s 100m semi-finals at 6:40 a.m.

Fraser-Pryce, who is seeking to win an unprecedented third 100m world championships gold medal will run out of lane six in semi-final heat one with compatriot Sherone Simpson lining up in lane nine.

The diminutive ‘Pocket Rocket’, Fraser-Pryce, looked impressive in the opening round winning her heat in 10.88.

She came into the championships with a season best of 10.74 with her eyes set on lowering her 10.70 personal best which is the national record.

Sherone Simpson qualified for the semi-finals after finishing third in a time of 11.22.

Simpson, who has a season best of 10.75 is seeking to progress to her second World Championships final following her first appearance a decade ago.

Medal hopeful English Gardner of the USA will also line up in the first semi-final heat.

The 22-year-old, who ran 11.08 to finish second in her heat behind Nigeria’s Blessing Okagbare, established a new personal best in June of 11.03.

Morrison will have for company in her heat, medal contender Tori Bowie of the USA and Trinidad and Tobago’s Kelly-Ann Baptiste.

Jamaica’s fourth representative in the semi-finals, Veronica Campbell-Brown, will run in heat three out of lane four.

Campbell-Brown, who finished second in her heat with a time of 11.04, has had a below-par season and came into the championships with a season best of 10.99.