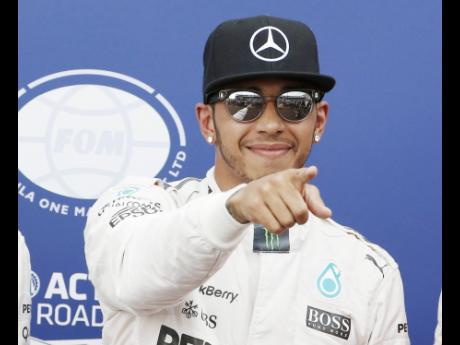 The Brit, who started on pole, took the chequered flag in one hour, 23.40 minutes, to beat Mercedes teammate and main title rival Nico Rosberg into second and record his sixth win of the Formula One season and the 39th of an already stellar career.

"It's been incredible. The whole circuit just packed out with all you fans. So thank you all for coming. And for me, just an amazing weekend again," a thrilled Hamilton said afterwards.

Starting on pole, Hamilton got away well, while Rosberg, second on the grid, struggled and fell behind Force India's Sergio Perez and Daniel Ricciardo's Red Bull.

By the time he reclaimed second spot, Hamilton was nearly nine seconds clear and controlled the race to the end.

"Nico had obviously good pace, but I was able to answer most of the time. So I was fairly relaxed at the front," said Hamilton, whose paternal grandparents hail from Grenada.

"The car, was feeling great, and it was really about looking after the tyres, particularly at the end when I saw that one of the tyres had blown on another car. I was being very cautious. So in the last two laps, Nico was allowed to close the gap."

With the win, Hamilton moved to 227 points, 28 clear of Rosberg.