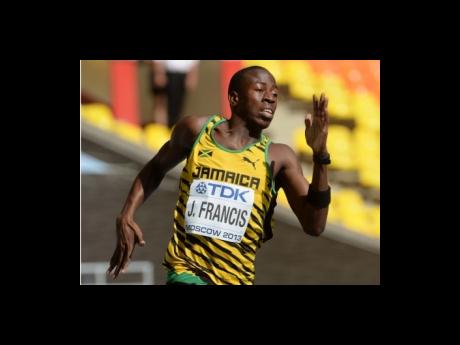 Francis, was the best placed Jamaican finishing fourth in semi-final three in a time of 44.77.

It was probably a case of running their best races too early for Jamaica’s 400m men, as they failed to progress to the final of the event set for 8:25 a.m. Wednesday.

Rusheen McDonald, who established a new national record in the heats, finished sixth in his semi-final heat in a time of 44.86. "I wanted to ensure Jamaica had a finalist, but I just couldn’t find anything else. That run in the heats seemed to have taken a toll on me."

The race was won by Botswana’s Isaac Makwala in 44.11 with enough energy left for press-ups after.

Peter Matthews was also unable to replicate his exploits of the opening round where he established a new personal best, as he finished at the back of the field in semi-final one with a time of 45.42.

The race was won by Grenada’s Kirani James in 44.16 with Dominican Republic’s Luguelin Santos (44.26) setting a new national record for third.

National champion, the 20-year-old Javon Francis, was the best placed Jamaican finishing fourth in semi-final three in a time of 44.77.

The race was won by South Africa’s Wayde Van Niekerk in 44.31 ahead of America’s LaShawn Merritt with a season best of 44.34.