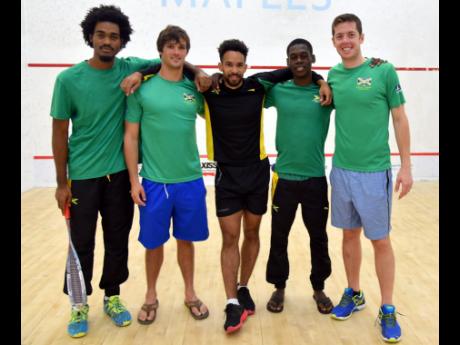 Jamaica's men's team trounced Trinidad and Tobago 4-1 to win the team competition for the first time in a decade as the 2015 Caribbean Area Squash Association's (CASA) senior championships wrapped up on Saturday night.

Fielding the strongest team in recent years, Jamaica went into the finals as the favourites and lived up their ranking.

Facing elimination, the Trinidadians put up their number-one player Kale Wilson. But Jamaica fielded six-time national and Caribbean champion, Chris Binnie, and that was the end of the matter. Binnie spanked Wilson 11-9, 11-4, 11-3 and Jamaica had the regional team title for the first time since 2005.

Although the overall result was decided, the teams played out the full five games and Bruce Burrowes lost to Don Lee, 7-11, 11-9, 8-11, 8-11, which allowed Trinidad to score at least one point.

"Everything went according to plan in the men's team competition," said senior national team manager Douglas Beckford. "We came in with the strongest team and the players delivered."

He said: "With Chris Binnie winning the men's championship for the sixth time and the Jamaican men taking the team title, we couldn't be more pleased with how the team performed at this year's Caribbean Championships."

Both the Jamaican women and the veterans teams finished sixth in their respective competitions. Jamaica finished fourth overall at the tournament.