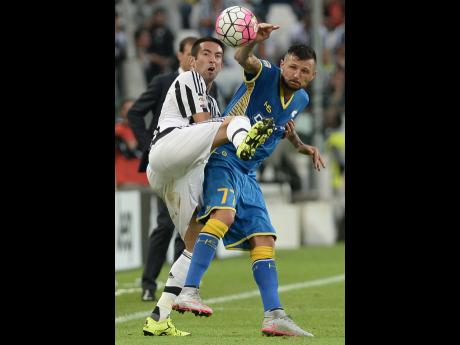 AP
Udinese's Cyril Thereau (right) challenges for the ball with Juventus Mauricio Isla, during a Serie A soccer match at the Juventus stadium, in Turin, Italy, yesterday. Udinese stunned Juventus by winning 1-0.

Udinese stunned Juventus by winning 1-0 in Turin yesterday, as the Italian champions' bid for a record-equalling fifth successive league title started with its first loss in 48 Serie A home matches.

Juventus dominated but were unable to finish any of their many chances, and Udinese made the host team pay when Cyril Thereau scored 12 minutes from time with one of his side's few opportunities.

The Bianconeri's last league defeat at the Juventus Stadium was on January 6, 2013, against Sampdoria.

"The result leaves a slightly sour taste," Juventus coach Massimiliano Allegri said. "We need to be more confident in our ability and to not lose heart when we don't score. The players did everything required of them for 70 minutes, apart from scoring."

It was Stefano Colantuono's first match in charge of Udinese - although his 200th as coach in the top flight.

"Juventus forces you to defend. You have to be good at hitting them on the few sniffs of a chance you get," Colantuono said. "That's what we did. It's not easy winning here ... . Our spirit is to fight for every ball and you saw that."

In the evening matches, Fiorentina eased past 10-man AC Milan 2-0, while Sassuolo beat Napoli for the first time in Serie A, coming from behind to win 2-1.

Newly promoted Carpi missed a penalty in its first-ever match in Serie A as they lost 5-2 at Sampdoria, which had David Ivan sent off late on. Frosinone was also playing in the top flight for the first time in their history and lost 2-1 at home to Torino, despite taking the lead in the seventh minute through Danilo Soddimo.