'This one is special', says Bolt of 100m victory 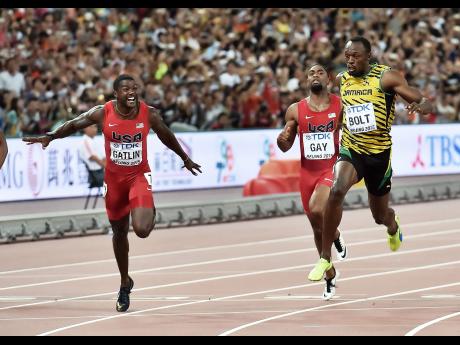 He saved his 100 metres world title, he saved his legacy, and perhaps he even saved track and field.

But with sprint queen Shelly-Ann Fraser-Pryce eager to strap on her jet pack, with the women's 100m semi-finals and final on today's schedule; and a pair of Jamaicans lining up in the women's triple jump medal round, the island's two-medal tally looks likely to increase by the end of today's action.

It was almost as if everyone had stepped inside a time warp and it was the 2008 Olympic Games again. The Bird's Nest sure felt like home for the Jamaicans yesterday.

Bolt, far from his best throughout the season, described the win as one of his most "special" yet given the issues he has had to overcome this year.

"It's a special victory. Justin (Gatlin) has been going great throughout the season, I have been struggling, and for me to come here and it comes together at the right time like this, is a special thing," said Bolt, after clocking 9.79 - the third-fastest time in a World 100m final - to beat Gatlin (USA), 9.80, and 20-year-olds Trayvon Bromell (USA) and AndrÈ De Grasse (Canada), who both clocked 9.92 to share the bronze medal. Asafa Powell, 10.00 was seventh.

"I have been through a lot this season and a lot of people really counted me out, so for me to come here and win is a big deal," added Bolt, who became the third man to win three World 100m titles.

He now becomes the most successful man at the World Championships, with nine gold and two silver, as well as the man with the most gold medals at the championships.

"If I want to continue my legacy, I had to win, so that was all the pressure I needed."

Richards continues to fly the flag as the island's leading competitor in the field, taking his stocks even higher with a bronze-medal performance in the shot put, equalling his NR of 21.69 metres to finish behind Joe Kovacs (USA), 21.93m, and David Storl (Germany), 21.74m.

Richards became the first Jamaican to win a medal in the event, following up on his success at the Commonwealth Games last year and the Pan American Games recently.

All three Jamaicans are through to the men's 400m, but it was McDonald who was most impressive. The MVP man clocked 43.93 - the same time as Saudi Arabia's Yousef Masrahi as the two enter the next round with the fastest time.

Peter Mathews, 44.69, posted a personal best to book his space after a fourth-place finish in his heat, with Javon Francis, 44.83, also booking his spot after a second-place job in his heat.

However, Shevon Stoddart clocked 56.60 for fifth and Ristananna Tracey clocked 57.60 for seventh place in her heat and were both eliminated.

Fraser-Pryce is the huge favourite to retain her 100m title, and she enters today's semi-final round as the joint fastest qualifier, along with American Torie Bowie, who, like her, clocked 10.88 in the heats.

Tuesday morning's session (Monday night) will see the running of the semi-finals of the women's 400m, with Damar Forbes expected to line up in the long jump and Usain Bolt leading the team of Nickel Ashmeade, Warren Weir, and Julian Forte in the heats of the men's 200m.