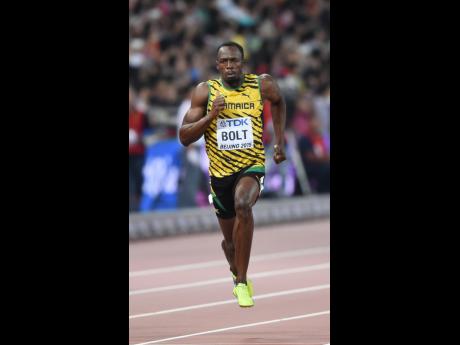 Bolt, who will run out of lane four in heat three, comes into the championships with a modest season best of 20.13

Usain Bolt, fresh from the triumph in the 100m, will begin the quest to also retain his 200m title when the half lap event begins at 6:30 a.m.

Bolt, who will run out of lane four in heat three, comes into the championships with a modest season best of 20.13 and in fact, though holding the world record of 19.19, has so far this year failed to dip below the 20-second barrier.

He will be challenged by world leader Justin Gatlin (19.57), who runs out of lane three.

Julian Forte, who was third at the national trials, will feature in lane six of heat five.

Forte, who has dropped his personal best to 20.04, will face off with Jamaica-based British athlete Zharnel Hughes (20.05).

Warren Weir, the Olympic bronze and World Championships silver-medal winner, will line up in lane eight in heat six.

Weir, who has a season best of 20.26, will be challenged by America’s Wallace Spearmon (20.03) running out of lane seven.