‘I was hungrier’, says Fraser-Pryce of World Championship 100m success 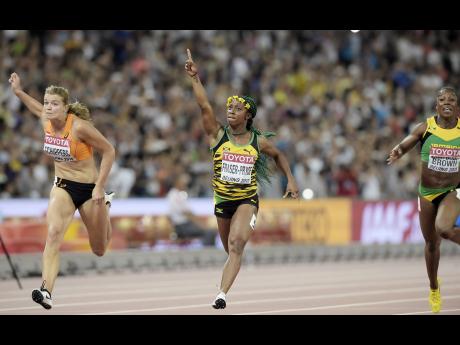 There is something about Jamaican sprinter Shelly-Ann Fraser-Pryce that seems to click when a gold medal is on the line.

The diminutive Fraser-Pryce stood tallest here last night, becoming the first woman to win three 100 metres World titles, and only the second to successfully defend, mining gold inside the Bird's Nest at the IAAF World Championships in Beijing, China.

It's a result that lifted Jamaica's medal count to three (two gold, one bronze) after three days of competition, while Fraser-Pryce - a beast at championships - added her seventh individual title (sixth gold) and 12th overall to her personal bounty, as she tried to explain what exactly that drives her fierce competitiveness.

"I'm very competitive; I relish competition; I love when persons tell me I can't do things; I love when persons doubt me. I love all of that because, for me, where it matters, I'm silently confident. I don't have to say anything, but my work and the work that I've put in, that's where my trust is," said a beaming Fraser-Pryce, shortly after her win, which came in 10.76 seconds - hers and the second-fastest time in the World this year.

Dafne Schippers of The Netherlands was some way behind in second place in a national record 10.81, with Torie Bowie, 10.86, of the USA, closing fast to snatch what seemed like a bronze medal from another Jamaican, Veronica Campbell-Brown, who had to settle instead for fourth in 10.99. Natasha Morrison was seventh in 11.02.

"She's awesome; I'm proud of her, and she has been having a great career," said Campbell-Brown in reference to Fraser-Pryce.

"I'm blessed to be here, and I'm just grateful to God for whatever comes this year. I tend not to dwell in the past, so I'm already thinking about the next thing, which is the 200m," Campbell-Brown added.

For Fraser-Pryce, the win didn't come with the time that she was expecting, but she was grateful for the result.

"Last year wasn't a good year for me, but I was able to trust the process. It's easy to have down times, but it's what we do with the downtime, and for me, I was even hungrier for this one," Fraser-Pryce said.

"Sometimes things are a blessing in disguise for us, and I just wanted to come out here where it all started in 2008 - a lot more experienced - and I wanted to come and enjoy the moment."

It's the most recent in a long list of 'moments' for the 28-year-old, who announced herself to the world in this very city and in this very stadium during the 2008 Olympic Games, where she surprised the field to win gold in the 100m.

Beside Fraser-Price's outstanding achievement, it was pretty much a mixed bag yesterday for the Jamaicans in Beijing, with Aisha Praught getting disqualified in the 3000m Steeplechase for a lane infringement; Damar Forbes failing to advance from men's long jump qualifying after a 7.62-metre effort; while the campaigns of all three competitors in the men's 400m semi-finals came to an end.

Kimberly Williams finished fifth in the women's triple jump with a 14.45m mark, while her teammate, Shaneika Thomas, was 11th with 14.08m. That event was won, as expected, by Colombian Caterine Ibarguen, with 14.90m, finishing ahead of Hanna Knyazyeva-Minenko (Israel), 14.78m, and Olga Rypakova, 14.77m.

New national record holder Rusheen McDonald seemed to still be feeling the effects of his 43.69 run in the heats, finishing sixth in the semis in 44.86. Javon Francis was fourth in his semi-final in 44.77, while Peter Matthews finished eighth in 45.42.

There was good news for the female quarter-milers, as all four moved into the semi-final round, with Christine Day, 50.58, and Stephenie-Ann McPherson, 50.34, winning their respective heats; and Novlene Williams-Mills, 51.07, and Shericka Jackson, 50.41, all advancing to the next round, which takes place at 6:05 a.m.

In the women's 400m hurdles, medal hopeful Kaliese Spencer, who was second in her semi in 54.45, and her young training partner, Janeive Russell, 54.78, also for second in her semi, were both comfortable and should like their chances for a medal when the final runs off tomorrow at 7:10 a.m.