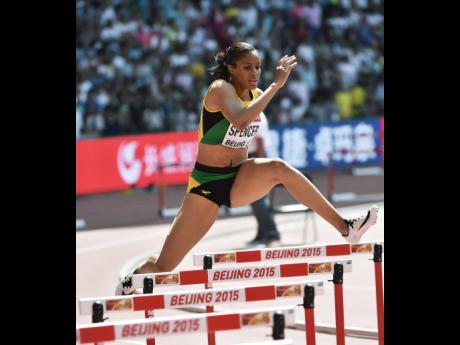 Kaliese Spencer is embracing her big sister role at MVP Track Club, sharing with The Gleaner that she takes pleasure in encouraging and offering advice to the younger athletes in the unit.

It's largely why she was so thrilled to see upcoming stablemate Janieve Russell join her in the women's 400m hurdles final at the IAAF World Championships in Beijing, China, set for tomorrow at 7:10 a.m. inside the Bird's Nest Stadium.

Spencer, whose run in the heats here in Beijing was also her return to competitive action after over a month on the sidelines, has looked good through her campaign and was easy as she qualified without breaking a sweat yesterday, clocking 54.45 for second place in her semi-final.

The Commonwealth Games champion, who is also hunting her first individual World Championships medal, will have Russell for company in the medal race, as the University of Technology student booked her spot with a second place finish in 54.78 seconds.

Spencer, who was disqualified after the first round in Moscow two years ago at the last instalment of the World Championships, was happy with her return to the 400m hurdles final and was also thrilled to see Russell, the bronze-medal winner at the Commonwealth Games, also secure her lane.

"I watched her (Russell's) race just now, she has been working really hard and it's great to see her in the final with me," Spencer said.

"I must give God thanks that I went through that race and I'm now into the finals, so I'm happy with that," she added, before picking apart her race.

"I got to the first 200m and I think it was pretty ok. When I got to the corner I had a bit of problems there, but I'm just grateful that I'm into the finals and I have a day's rest, so I can go back and get ready for it," said Spencer.

An extremely calm-looking Spencer added that she is not overly concerned with her past experience in finals, noting that she is putting all her trust above as she prepares to launch an assault on a podium spot.

"When God is in it everything is different, so I'm just getting prepared for my final. To God be the glory, I'm very spiritual, I knew I would be in the final and I'm really happy I'm there now and that's my focus," Spencer said.