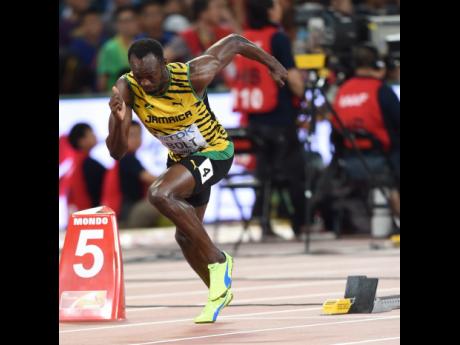 Ricardo Makyn
Jamaican sprinter Usain Bolt explodes from the starting blocks during competition in the men's 200 metres heats at the IAAF World Championships at the Bird's Nest Stadium in Beijing, China, yesterday.

His 100m clash with American Justin Gatlin may have been the main talking point, but as far as sprint king Usain Bolt is concerned, retaining his 200m title at the IAAF World Championships would mean more to him than Sunday's 100m triumph inside the Bird's Nest.

"It would mean a lot more to me to win this 200m, a lot more than it meant for the 100m," Bolt said yesterday. "For me, I'm trying to get through these rounds as comfortable as possible, with as least energy as possible, go in the final and give my best."

The Jamaican is also bracing for what he expects to be a much tougher task, as he looks to extend his record to an unmatched four consecutive World Championships gold medals in the event. Bolt is also joined with Frankie Fredericks as the male athletes with the most 200m medals at the World Championships, with four.

Another will put him one behind Merlene Ottey as the most successful of all time in the event at these championships.

Lining up in the heats, Bolt ran his best 200m of the season yesterday; not that it would have been too difficult to do so, given this pedestrian times in the event this year. He appeared controlled and relaxed to finish in 20.28 seconds, with Cuba's Roberto Skyers, 20.29, and Yancarlos Martinez (Dominican Republic) third in 20.34.

Running is perhaps an overstatement, considering the sprinter's ease, as he only ran about 130 metres of the race and casually jogged to the line, conserving energy and keeping sore legs as fresh as possible for the real assignment ahead - the 200m final - which he expects to be even more challenging than the 100m, which he won in 9.79 on Sunday.

Bolt will be joined in the semi-final round, set for 7:30 a.m. this morning, by all three of his countrymen in the event.

Warren Weir, the 2012 Olympic bronze- and 2013 World Championships silver-medal winner, came off the curve in front, but didn't seem to be too worried to actually win his heat, finishing second in 20.24, with Julian Forte, 20.14, also easing up at the line as Jamaica-based Great Britain athlete Zharnel Hughes took the win.

Jamaica is the first country to qualify four athletes to a 400m final at any major global championships after Shericka Jackson, who enters with the second-fastest time; Stephenie-Ann McPherson; Novlene Williams- Mills; and Christine Day all secured lanes.

Jackson coasted to the line with medal favourite Allyson Felix (USA), who ran 49.89, with the Jamaican logging a personal-best 50.03, as the pair dominated their semi-final field.

Williams-Mills, who has been struggling with a thyroid infection this season, was third in 50.47, her first time below 51 seconds this year.

McPherson ran her fastest time of the season, 50.32, to finish behind the championship-primed Brit, Christine Ohoruogu, 50.16, while Day posted 50.82 to finish behind another favourite, Shaunae Miller from The Bahamas, who clocked 50.12 for her win.