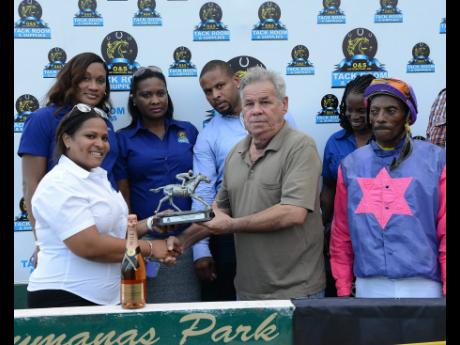 Following her fast-finishing second to RASHAIDA over the straight-five course on August 15, LITTLE RHEA is expected to come into her own and win today's feature race over 1300 metres for the Henry George Harrison Sr Memorial Cup at Caymanas Park.

The race, run in memory of the late trainer Henry 'Rigg' Harrison, is confined to native-bred four-year-olds and up, non-winners of two.

Trained by Ryan Darby, LITTLE RHEA caught the eye at long odds in her previous race, when closing rapidly for second, a length adrift of RASHAIDA. With that performance under her girth, she will be among the fancied runners in the nine-horse field, which includes BATTLE SONG, who was only a length and a quarter behind her in fourth that day.

Both horses should come in for a lot of support, along with the recent course winner, ROYAL GIRL, and UNCLE CHUBBY. But with LITTLE RHEA having advertised her well-being, the 4-y-o filly by War Marshall out of Princess Akeem, owned and bred by Phillip Azar, is ready to deliver with Kerry-Gayl Robinson again in the saddle.

True, she is without a victory in 10 races this season. But she has the ability to beat non-winners of two, based on her short-head second to SHEER MADNESS over 1100 metres back in January, leaving some decent horses such as GLORIOUS CAUSE and FIFTYONESTORM behind.

LITTLE RHEA is expected to sit off the early pace, which will likely be set by the speedy ROYAL GIRL, with former champion Wesley Henry aboard, and BATTLE SONG, with in-form Aaron Chatrie aboard. The Victor Williams-trained BATTLE SONG should prove the stronger of the two pacesetters leaving the furlong pole, but by then, LITTLE RHEA will be finding her best strides. She should outfinish BATTLE SONG in the last 100 metres for the victory.

Other firm fancies on the nine-race programme are PROLIFIC PRINCESS to go one better in the first race for maiden three-year-olds, down-in-class FRANKENSTORM in the second, as well as HOLOGRAM SHADOW in the third, NATASHADONTPLAY in the knotty-looking fifth race over 1500 metres and PRINCESS SALLEMA in the closing race.