At the Bird's Nest, it's another Dibaba gold medal 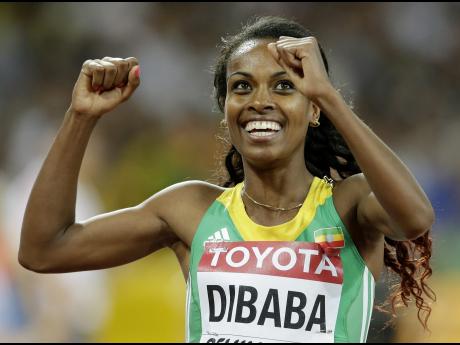 At the Bird's Nest, it's another Dibaba gold.

Seven years after Tirunesh got a long-distance double at the Beijing Olympics, little sister Genzebe won her first gold medal at the same stadium at the World Championships - bringing her halfway to her own double.

The Ethiopian sisters have the same languid, elegant stride, which packs a ferocious acceleration in the final stages of any middle and long-distance race.

Genzebe proved that when she kicked for home halfway through the 1,500-metre final. No one could get on her shoulder again, and she even had time to punch the air four times and cross the line with a windmill motion, metres ahead of silver medallist Faith Kipyegon of Kenya.

"I wanted to share this family experience," Genzebe said.

Tirunesh, now 30 and a mother of son Nathan, already has a standout record with three Olympic and five long-distance World titles to go along with five World cross-country titles, but the 24-year-old Genzebe is planning to close in fast.

The younger sibling has two World indoor titles and two world cross-country titles on top of yesterday's gold. And just this year, she set the World record in the 1,500.

Not that Genzebe needs much sisterly help when her running is already so good, but when asked about the best advice she ever got from Tirunesh, the answer comes immediately.

Next up for Genzebe is Sunday's 5,000 and a chance to make it double, just like her big sister.