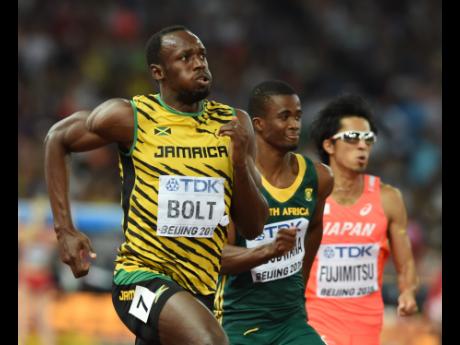 Bolt ... I'm not going to let Gatlin beat me, that's for sure. I'm not even worried.

Usain Bolt has stayed on course for his 12th individual major championship medal after cruising into the final of the men’s 200m set for Thursday at 7:55 a.m.

Bolt won semi-final three in a season best time of 19.95 as he aims for his fourth consecutive World Championships 200m title.

"I'm not going to let Gatlin beat me, that's for sure," Bolt said.

"I'm not even worried. I feel really good, I'm more of a professional when it comes to the 200m so it was all about qualifying with as little effort as possible. That was easy and felt good."

It was not all rosy for Jamaica, as Olympic bronze and World Championships silver-medal winner Warren Weir failed to progress after finishing seventh in his heat in 20.43 seconds.

The race was won by Jamaican-based British athlete Zharnel Hughes in 20.14 with Jamaica’s Nickel Ashmeade taking second in 20.19, as both advanced to the final.

Julian Forte also failed to make the final, as he finished at the back of the field in semi-final heat two with a time of 20.57.

The race was won by American Justin Gatlin, who will be out for revenge after losing by 100th of a second to Bolt in the 100m final.

Gatlin threw down the gauntlet to lead all qualifiers with a time of 19.87.