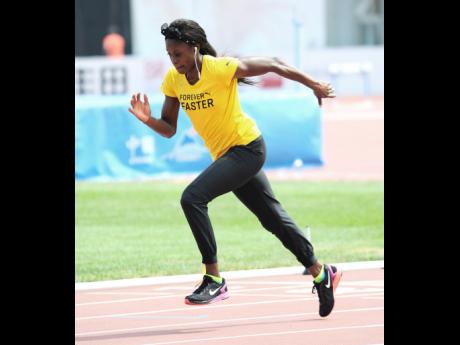 Ricardo Makyn
The national champion, Elaine Thompson, who burst onto the scene this season, will run out of lane five in heat four.

Jamaica’s three representatives in the women’s 200m will seek to book their places in the semi-final when the heats get underway at 6:15 a.m.

With the decision that Shelly-Ann Fraser-Pryce will not be defending her half lap title, Jamaica's medal hunt has been left to Elaine Thompson, Veronica Campbell-Brown and Sherone Simpson.

The national champion, Thompson, who burst onto the scene this season, will run out of lane five in heat four.

The 23-year-old former Christiana and Manchester high schools past student goes into the event with a personal best of 22.10 recorded at the Sainsbury's Anniversary Games in July of this year.

Campbell-Brown, who is seeking her fourth 200m World Championship medal having won gold in 2011 and silver in 2009 and 2007, will line up in heat five running out of lane five.

The 33-year-old’s has had a challenging year which sees her with a season best of 22.61, and will look to produce her best performance of the season at the championships as she did in the 100m to finish fourth in the final.

Simpson will face the starters out of lane six in the seventh and final heat.

The 31-year-old, who like Thompson attended Manchester High, has a season best of 22.62 achieved at the national trials in June.