History-makers not done yet 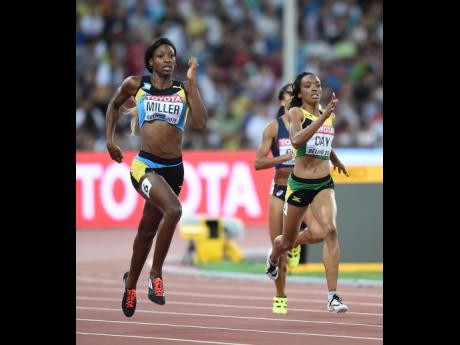 Veteran Novlene Williams-Mills and Christine Day form part of the history-making quarter-mile quartet that sent Jamaica to the record books for being the first nation to qualify four athletes to a 400 metres final at any major global event.

Shericka Jackson and Stephenie-Ann McPherson will join Williams-Mills and Day in tomorrow's final of the IAAF World Championships inside China's Bird's Nest stadium here, and both are feeling pretty good about their chances.

For Williams-Mills, the bronze-medal winner in 2007, getting to the finals seemed like too much of an ask a few months ago as a thyroid infection and other physical setbacks meant that she entered the championships coming off one of her worst seasons.

In fact, yesterday's 50.47-second run in the semi-finals was her first time running below 51 seconds this season. But the experienced campaigner, who hailed her teammates for their role in the history-making feat, says she is entering the final with a positive attitude.

"Anytime you go into a World Championships and you can even be in the final, it's a big accomplishment because there are so may people who are running and trying to make it to the final, and the plus thing is we are the only country with four persons in the final," said Williams-Mills, a breast cancer survivor.

"It's been a rough year. I was taking it race by race. I will rest up and then, as usual, I will come and give it my best in the final," added Williams-Mills, the Diamond Race winner from last season.

"Eight people will line up in this final, three medals, and we are all going after the same thing, so we will see how it works out," she added, when discussing her chances.

Day has had a productive year on the track, from winning a bronze medal at the Commonwealth Games to making her first 400m final at a World Championships, after two attempts.

The wiry sprinter bowed out at the semi-final stage of the Berlin and Moscow editions of the World Championships in 2009 and 2013 and also failed to make the final at the 2012 Olympic Games.

Happy to be there

"God is really good. My aim was to ensure I secured a spot in the final, and I'm really happy that I was able to do that," said Day, who was, nevertheless, not too pleased with her execution. "I was just working on my technique and tonight I didn't think I executed properly. I know what I did wrong, so I'm still happy."

Day, who finished second in her semi-final in 50.82, has been busy on the circuit this year and hinted that regularly competing with the world's best has helped her to learn to pace herself, while building her confidence as well.

"When you are racing with the top girls, it builds your confidence and it doesn't put you under any type of pressure. You just have to run your own race, and that's what I'm focused on doing," said Day.