I misstepped and couldn't pull it back, says Kaliese Spencer 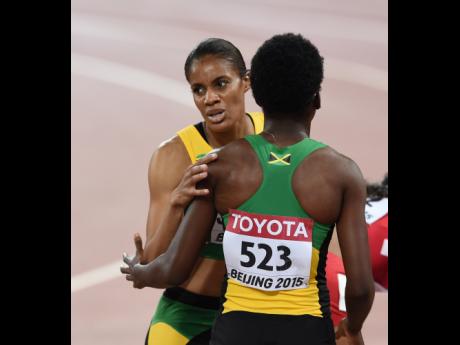 Kaliese Spencer blamed a "misstep" for her dashed opportunity at winning her first major championship medal on her sixth attempt.

The 28-year-old was expected to bring Jamaica’s medal tally to four following Usain Bolt’s gold in the men’s 100m, Shelly-Ann Fraser-Pryce’s gold in the 100m women and O’Dayne Richards’ bronze in the shot put.

"I’m not really too upset now, maybe when I look back at the tape. But I missed a step to a hurdle and it threw off my momentum and I just couldn’t pull it back," Spencer said.

The 21-year-old, who was making it to the final of a major championship on her first attempt, was pleased with her performance and is already looking forward to next year’s Rio Olympics.

"I came here with the intention to make it through the rounds and into the final and I managed that so I’m happy," Russell said.

"I’m also grateful for the PB because that was also a target of mine. I’m encouraged going forward and looking forward to the Olympics."

The race was won by Zuzana Hejnova of the Czech Republic in a world leading time of 53.50 to become the first woman to win back to back 400m hurdles titles at the World Championships.

This was only the 10th time in 27 races that Hejnova was beating Spencer, who has dominated on the circuit.

Shamir Little of the USA (53.94) took the silver with her teammate Cassandra Tate (54.02) taking the bronze.