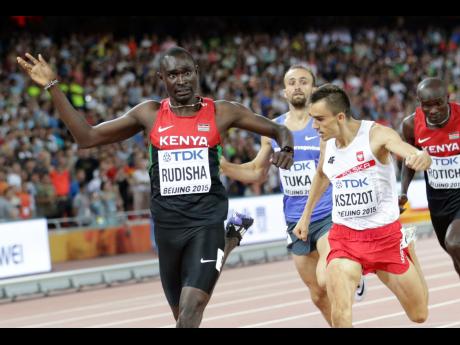 This World title came in a tactical race for David Rudisha, so very unlike the wire-to-wire run at the London Olympics that earned him a gold medal and a world record in the 800 metres.

For the 26-year-old Kenyan, it felt just as good.

Rudisha missed the chance to defend his World title two years ago in Moscow because of an injured right knee, which restricted him to just two races that season. He endured the doubts and the pain and some hard-to-take losses before arriving in China as an outside contender for gold.

On top of that, his first-round race was only hours after Kenya's highly rated marathon runners bombed out in the opening event of the championships on Saturday, with two failing to finish and none making the top 20. It cast a long shadow over the whole Kenyan squad, something Rudisha promised to lift.

And lift it, he did. His win yesterday gave Kenya their fourth gold medal - and the top spot in the standings - after four days.

"This means a lot to me. Coming here, I wasn't the top in the world; I wasn't the favourite," he said. "I just came here as an underdog, (but) that worked on my side because I had little pressure coming back here. People weren't focusing on me - they were focusing on the other guys. At least I sneaked in very nicely without a lot of pressure."

That also applied to Nicholas Bett, who was a surprise winner in the 400-metre hurdles, clocking a season-l eading 47.79 earlier in the night. Kenya picked up their first two golds on Monday in the steeplechase and the women's 10,000m.

Two important factors contributed in his favour in the final: three Kenyans were competing and able to dictate the pace and positions to a degree, and defending champion Mohammed Aman of Ethiopia and Olympic silver medallist Nijel Amos of Botswana didn't qualify.

Rudisha was content to hold back, coasting through the first lap in 54.17 seconds. As the race reached a climax, Adam Kszczot of Poland got boxed in and Amel Tuka was forced to run wide. The two times he was challenged, Rudisha responded with bursts of speed and finished in one minute, 45.84 seconds.

Europeans took silver and bronze, with Kszczot finishing second in 1:46.08 and Tuka third in 1:46.30, earning the first track and field medal ever for Bosnia.

Kszczot said he was peeved at the race tactics: "Nobody would pass him. If I'd been in the outer lanes, I would have done it."

Tuka, however, congratulated Rudisha on his shrewdness.

Tuka and all the other 800 runners will now be aiming to beat Rudisha at next year's Olympics. And Rudisha is ready for the challenge.