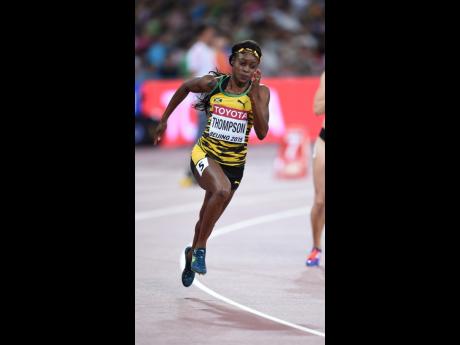 Jamaican medal prospect, Elaine Thompson, led her other two compatriots into the semi-finals of the women’s 200m set for Thursday at 6:35 a.m.

Veronica Campbell-Brown also won her heat to progress, as she stopped the clock at 22.79.

Campbell-Brown, who won the title back in 2011 caused a slight scare, however, after running the entire home stretch in lane six instead of her assigned lane five.

She was not disqualified because switching lanes meant she ran longer distance.

At the same time, she was well ahead of Britain’s athlete Margaret Adeoye so was deemed not to have interfered with her.

Sherone Simpson finished second in her heat in a season best 22.52 to also make the semi-finals.

The race was won by Great Britain’s Dina Asher-Smith in a personal best 22.22 to be the fastest qualifier.

Dafne Schippers of The Netherlands, who won silver in the 100m, also qualified after winning heat six in 22.58.