AUDIO: Don't talk about me and my 200m like that again, Bolt tells Gatlin 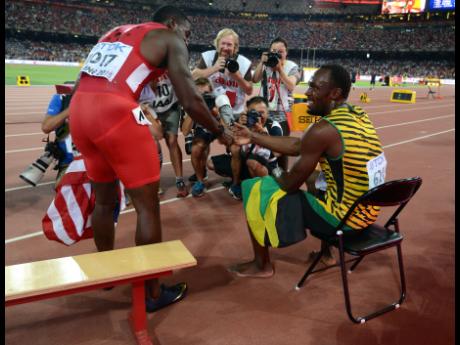 When Usain Bolt took to the Beijing track for the 200m final Thursday, his goal was more than just to win.

He wanted to send clear warning to his rival, America's Justin Gatlin.

"I celebrated early because earlier in the week Gatlin said some things about bringing something special in the 200m so I wanted to show him that he should never talk about me and my 200 metres like that again!" Bolt told The Gleaner's Andre Lowe.

Usain Bolt speaking with The Gleaner's Andre Lowe and other reporters

At the same time, Bolt said there was no doubt that he would triumph in his pet event.

"This is a big deal to me, everyone know how much I love this event," he said. In the meantime Gatlin has conceded that the Jamaican super star is just too good for him.

"I gave it everything I had, kept my form as long as I could but in the end I'm happy for my performance," he said.

"The guy (Bolt) is a great competitor and I'm already looking forward to Rio."

Rio is where the 2016 Olympics will be held.