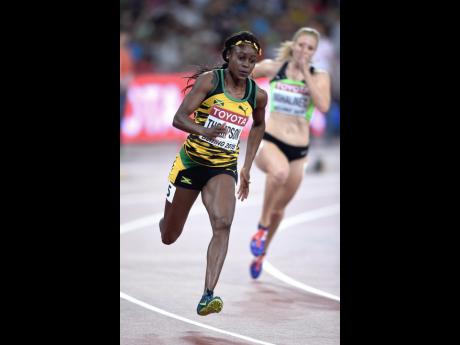 Ricardo Makyn
Thompson will be first up in semi-final heat one where she will run out of lane four.

Jamaica will be represented in all three semi-final heats of the women’s 200m slated to get underway at 6:35 a.m.

Favourite, Elaine Thompson, Sherone Simpson and Veronica-Campbell-Brown will be seeking to flash the black, green and gold in the final.

The national champion, Thompson will be first up in semi-final heat one where she will run out of lane four.

The 23-year-old, who is competing at her first global championships, easily won her opening round heat in 22.78.

Meanwhile, Simpson, who finished second in her heat in a season best time of 22.52, will line up in lane five in semi-final heat two. Simpson will face medal favourite Dafne Schippers of The Netherlands, who qualified after winning heat six in 22.58.

Schippers was the silver medal winner in the women’s 100m.

Campbell-Brown, who is seeking her fourth 200m World Championship medal having won gold in 2011 and silver in 2009 and 2007, will line up in the third and final semi-final heat running out of lane four.

The 33-year-old with a season best of 22.61, has been producing her finest races of the year at the championships.

She, however, suffered a major scare in her opening round heat which she won in 22.79 after running the straight in the wrong lane.