'I can't focus on negativity' - Spencer 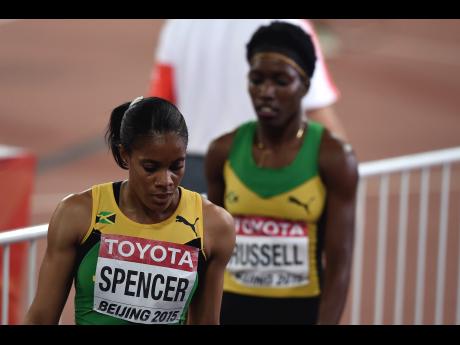 However, after her shocking eighth-place finish in the 400m hurdles final at the IAAF World Championships in Beijing, China, yesterday, Spencer says she isn't paying too much attention to criticism about her mental strength in finals.

Running from lane seven, Spencer had early issues with her approach to her first hurdle, clipped another and almost fell as she struggled to really get going, eventually crossing the line at the back of the pack in 55.47 - her worse time since June 2012. It was also only Spencer's third loss since May last year.

The event was won by Zuzana Hejnova, who clocked a world-leading 53.50 ahead of Americans Shamier Little, 53.94, and Cassandra Tate, 54.02. Young Jamaican Janieve Russell finished in fifth place with a personal best 54.64.

"Unfortunately, I think my run-up was too slow for the first hurdle, and from there I wasn't able to catch my rhythm and it cost me," Spencer explained. "I wasn't actually getting my stride pattern properly.

"I'm not even going to think about those negative vibes, I am just going to stay focused, continue training; next year is the Olympics, so I'm looking forward to coming back and regrouping from there," added the hurdler, who said she would steer clear of criticism around her poor record in major finals.

"I am very strong. I have been going through this for a few years now and I have a lot of people who motivate me - my church, family, friends - so there is no need to break down or be disappointed, I just have to go ahead and continue training. I am still hopeful (of that medal)," said Spencer, who won medals at the 2014 IAAF World Indoor Championships (silver, 400m) and the 2014 Commonwealth Games (gold, 400m hurdles).

"Right now, I am kinda okay. I don't know if when I go back to the hotel, I will be thinking about it too much, but for now I am okay," Spencer said. "To God be the glory. I came out here and made it to the final and I have to give thanks because it was an up-and-down season for me, so I have to be grateful. I wasn't feeling pressured at all, I was really relaxed and ready to go."