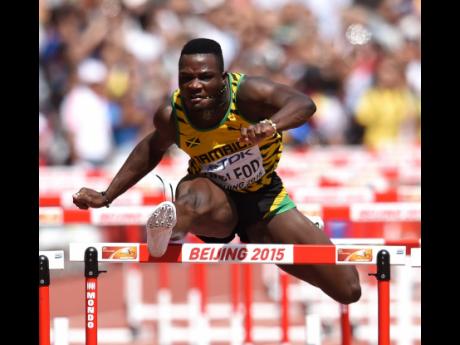 Omar McLeod arrived in Beijing as quite a big deal, being the fastest man in China entered in the 110m hurdles at the IAAF World Championships.

It almost came undone for the in-form Jamaica champion, who survived an eventful heat yesterday to book his spot in today's semi-final (6:05 a.m.) and keep alive his dream of becoming Jamaica's first World champion in the event.

In fact, no Jamaican has ever won a medal in this event at the World Championships, with Maurice Wignall's fifth-place finish in Berlin in 2009 being the best placing by a Jamaican at these championships.

McLeod, whose 12.97 seconds at the National Senior Championships leads all competitors here, saw hurdles crashing around him, hit four of them himself and also got hit on the arm by Trinidad and Tobago's Mikel Thomas - who later crashed out of the race.

The Jamaican, however, still kept his composure to finish second in 13.43 behind Barbados' Shane Brathwaite, 13.28, with China's Wenjun Xie, 13.44, taking third.

McLeod is certainly not hiding from suggestions that he is the man to beat in Beijing, underlining that he is fine with being considered a favourite to win and declaring his psychological readiness for a shot a history.

Happy to be in semis

"I'm tough all round. I really wanted to make the semi-finals. When everything happened, I thought I was a bit behind, but I told myself, 'top four, play it safe, no pressure, just have fun and make the semi-final,' and I'm happy I was able to do that," said McLeod. "It probably was my worst race, but this is hurdles, and you have to go in mentally tough, if stuff like this happens, you have to know how to deal with it.

"I have the fastest time here, so, obviously, I am the man to beat, but I try not to think about it too much. All I want to do is to try and run the same race I've been running all season," McLeod added. "I'm not here to think about anybody else. Everybody wants it and it's going to boil down to who has the most perfect race on the day. I'm ready to go and I'm feeling good.

"I really just wanted to come out here and get this first run under the belt. Obviously there were a lot of flaws in the race as you saw. This is really going to test my strength going forward and I'm looking forward to it," added the 2015 NCAA indoor and outdoor champion, who a couple months ago announced his decision to turn professional.

"It's of course my first World Championships and I was excited. I was really nervous and wanted to get going, feel the stadium and the atmosphere, and I'm happy I did," he shared.

McLeod will run out of lane six in semi-final two, where he will come up against world record holder Aries Merritt and French medal hopeful Pascal Martinot-Lagarde.