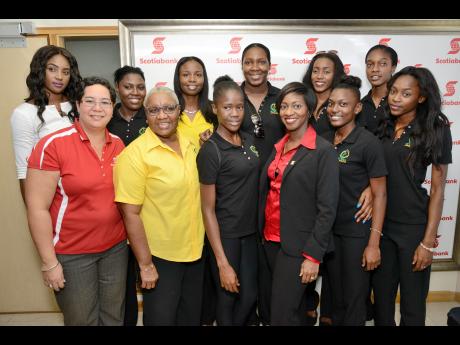 International Netball Federation (INF) president, Molly Rhone, believes that despite Jamaica's team returning home without medalling at the Netball World Cup in Sydney, Australia, they should be credited for retaining their fourth-place world ranking.

Australia won the championship ahead of archrivals New Zealand, while England placed third. The Sunshine Girls again failed to medal, just like at the 2011 World Cup.

"I don't think people understand what some of these ladies (Sunshine Girls) are up against when they go out there to play these giants," Rhone said yesterday, while speaking at an official breakfast to welcome home the Sunshine Girls, inside Scotiabank's marketing boardroom, at their office downtown Kingston.

"They (Australia, New Zealand and England) are not only giants in terms of play, but their size and the whole operation that they lead," continued Rhone.

The INF president noted: "Australia has a company of 150 employees, England has more than that and New Zealand about 60," while stressing that Australia's talent pool numbers about one million.

"We are still number four in the World and that's some achievement for a team sport in Jamaica. So girls, well done, management, coach, Marva (Bernard) I know you have given it your all. Congrats, and I wanna thank Nova Scotia because you are one of the people who have stuck with them," Rhone added.

Scotiabank has been supporting the development of Jamaica's netball programme since 2006. Michael Jones, senior vice-president of human resource, lauded the Sunshine Girls.

"I wanna let the team know that no matter where you got to, we regard you as great winners, as part of an enduring legacy of great winners that Jamaica has produced and continue to produce," he outlined.

"I would really just like to say to my ladies, do not empower the naysayers, do not empower the critics, we have nothing to be ashamed of, we are proud Jamaicans, we are proud Sunshine Girls and we know it has been difficult for us coming home here. But guess what, we are resilient and thankful to Scotia Bank and all our sponsors," stressed Bernard.