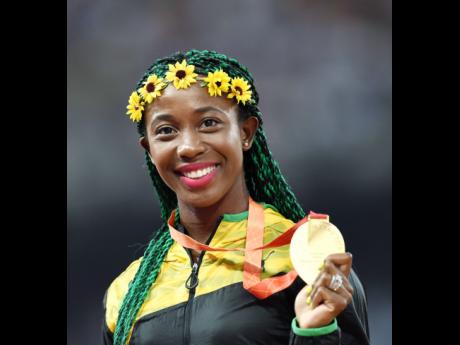 Like all Jamaican athletes in every era, Shelly-Ann Fraser-Pryce labours under the considerable shadow of the tall man from Trelawny, Usain Bolt. It's not her fault that he is a super icon. All she can do is what she has always done - win, win and win.

As she continues to blossom, one truth has become self-evident. Shelly is great.

In fact, with a growing collection of gold medals and fast times, the little lady is the most successful 100-metre sprinter ever. Even before her second big win in Beijing, she was the only sprinter with two Olympic titles and two World titles.

That leaves Shelly with one option; if she wants to break the 'tie' she has with Devers and Tyus, all she has to do is win a medal next year in the 100 metres at the Rio Olympics.

Three Olympic gold medals in the same would do the job nicely.

That's in the future. For now, the rocket-starting Jamaican has erased our memory of her sole 100-metre loss of the season. That was a jet-lagged loss in Shanghai. Since then, she has won all her races with consistent speed.

Consistency is the hallmark of her career. Even those who wanted her off Jamaica's 100-metre team jumped for joy when she led an unprecedented 1-2-2 finish in the 2008 Olympic final, in 10.78 seconds.

To press the point, she edged past Merlene Ottey's longstanding Jamaica record by 0.01 to win over compatriot, Kerron Stewart, at the 2009 World Championships in 10.73 seconds.

A stumble at the start and a season of injuries cost her a medal at the 2011 Worlds, but the little one bounced back.

In London, she repeated her 2008 win with a hard-running triumph over World champion, Carmelita Jeter of the United States.

In Moscow at the World Championship in 2013, she destroyed the 100 field in the first half of a sprint double. Believe it or not, Murielle Ahoure, the fine Ivory Coast sprinter, was defeated by a smidge over two-tenths of a second. That's an eternity in sprint racing.

The evidence forces one conclusion. Even if you ignore her 2013 200-metre World title and her 2012 Olympic silver medal behind elegant American Allyson Felix, the truth stares you in the face. It's very simple. Shelly is great.

- Hubert Lawrence was in Beijing when Fraser-Pryce won her first Olympic gold medal.