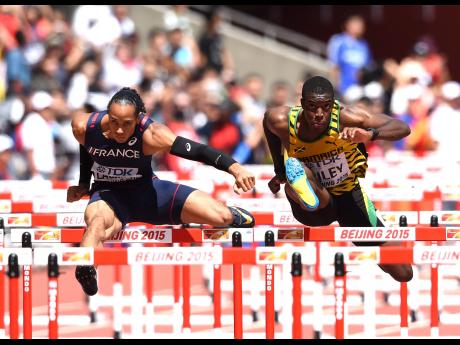 As all three Jamaicans prepare to compete in today's 110m hurdles semi-final, Olympic bronze-medal winner and national record holder, Hansle Parchment, believes it will take a sub-13 seconds effort to win gold in the event at the IAAF World Championships.

Meanwhile, Andrew Riley, the Commonwealth champion, is hoping to make amends for the seventh-hurdle disaster he suffered in Moscow at the last World Championships, as he crashed out when looking destined for a medal.

Parchment, whose 12.94 seconds remains the national record - despite being threatened by Omar McLeod, who clocked 12.97 to win at the National Senior Championships - is convinced he will have to test his mark himself if he is to win gold at the championships.

The towering Jamaican clocked 13.33 seconds to win his heat yesterday, the fastest time among the Jamaicans.

McLeod recovered from some early trouble to finish strongly in second, clocking 13.43, the same time done by Riley, who also finished second in his heat.

"I believe all the guys are gunning for very fast times and it's going to be a tough competition. For the finals, I believe that there is a high possibility that the winner will run under 13 seconds," Parchment told The Gleaner.

"It was a pretty good first race after so long. There are still a few things to work on, especially relating to my technique and so on, but once I can get these things going, then the next round should be better," added Parchment, before summing up his chances.

"It's an open field and anyone can win. There is no clear person and I feel I am among the group of athletes that can get on top. I am keeping my confidence up. I'm ready to give my best effort," said Parchment.

He noted being in good physical condition after what was only his first run since the National Senior Championships in June.

Riley, whose heat was delayed for several minutes after American Ronnie Ash and Slovak Petr Svoboda were ejected for false starts with the former holding up the race in dispute of the decision, said a medal in Beijing would mean everything to him, especially given his disappointments two years ago.

"It would mean a lot. In the last World Championships when I was in the mix and I ran into the seventh hurdle, I was really disappointed, but at the end of the day, you just have to keep on going and hope that one day your time will come," Riley said, before admitting to watching replays of that race repeatedly in the past.

"Earlier in the season, I had some hiccups, but now my training is going well. But anything can happen in the 110m hurdles, it's 42 inches, so I just have to prepare myself to attack each hurdle," said Riley.