We will be OK ... Parchment, McLeod looking forward to 110m hurdles final 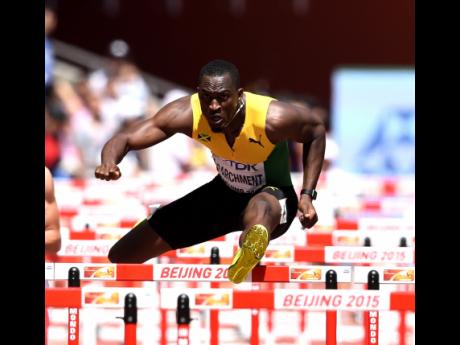 Ricardo Makyn
Parchment ... It’s an open race and I’m not feeling any pain, so I like my chances of getting a medal.

Hansle Parchment is upbeat that about landing his second senior championships medal after qualifying for the final of the men’s 110m hurdles set for Friday at 8:20 a.m.

The Olympic bronze is joined in the final by youngster Omar McLeod.

Parchment recovered from a slow start to finish second in semi-final heat one in a time of 13.16 to make progress.

"It’s an open race and I’m not feeling any pain, so I like my chances of getting a medal," Parchment said.

"I’m not pleased with my start I think I need to stop thinking so much about it and I will be OK."

The 21-year-old McLeod was also second in his semi-final heat despite hitting every hurdle, as he posted 13.14 with world record holder Aries Merritt of the USA winning in a season best time of 13.08. "I didn't realise I hit so many hurdles but I had an issue at the first and that threw me off," he said.

"I had to stay focused, tunnel vision and pull through. It tells me that I am strong."

Jamaica’s other representative in the semi-finals, Andrew Riley, missed out on a place in the final after placing fifth in semi-final heat three in 13.43.
The race was won by Dimitri Bascou of France in a new personal best of 13.16 ahead of defending champion David Oliver 13.17) of the USA.