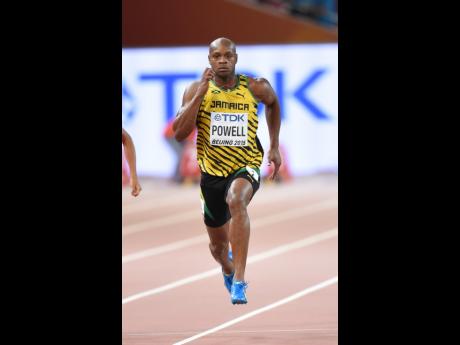 Asafa Powell will run the back stretch for Jamaica during Saturday's men's 4x100m heats at the IAAF World Championships in Beijing, China.

Powell has been pencilled in for the second leg with Nesta Carter running his usual lead off leg, Rasheed Dwyer will run the curve and Tyquendo Tracey will anchor.

Double sprint champion Usain Bolt will anchor in the final with Nickel Ashmeade expected to come in for the third leg.

The women's 4x100m relay team will be determined after the women's 200m final tonight.

In the men's 4x400m heats, new national record holder Rusheen McDonald will get a rest with Peter Matthews given responsibilities for the lead off leg.

He will hand off to Ricardo Chambers, who will pass to Dane Hyatt with Javon Francis running anchor.

McDonald will replace Hyatt for the final.

As reported earlier, 400m bronze medallist Shericka Jackson and veteran Novlene Williams-Mills are being rested until the final of the 4X400m with Stephenie-Ann McPherson, Annastasia Le-Roy, Chrisann Gordon and Christine Day representing the island in the heats.

Jackson and Williams-Mills will replace Gordon and Le-Roy in the final.