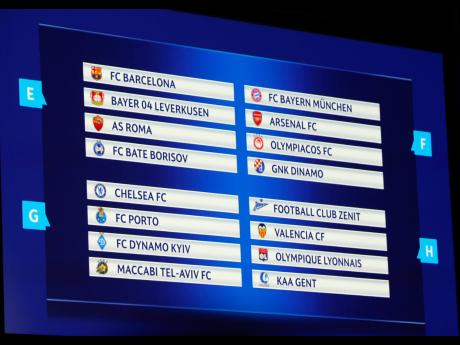 Barcelona got a favourable start to their title defence, Zlatan Ibrahimovic's wish to go home was granted and Benfica were given the longest trip in Champions League history yesterday.

The group-stage draw also means Bayern Munich play Arsenal for the third time in four seasons, and sent Chelsea coach JosÈ Mourinho back to Porto, where he won his first Champions League title.

Manchester United's return after a one-year absence will be at Group B's top-seeded club, whose best player was bought in the offseason. United's new No. 7, Memphis Depay, can look forward to a September 15 date back at PSV Eindhoven.

World football's most coveted club competition set up many story lines for the 32 elite clubs who will share €1.2 billion ($1.37 billion) in UEFA prize money over the next nine months.

Defending champions Barcelona will kick off at Roma and also play BATE Borisov and Bayer Leverkusen. Messi routed the German side with five goals in a 7-1 win when they met in the last-16 round in 2012.

Ronaldo and Real Madrid landed in a tougher group with Shakhtar Donetsk and Ibrahimovic's current and first clubs, Paris Saint-Germain and Malmo.

"One day I hope to experience the Champions League in Malmo on the pitch. Congratulations!" the Sweden great had posted on Twitter after his boyhood club advanced through the play-off round on Wednesday.