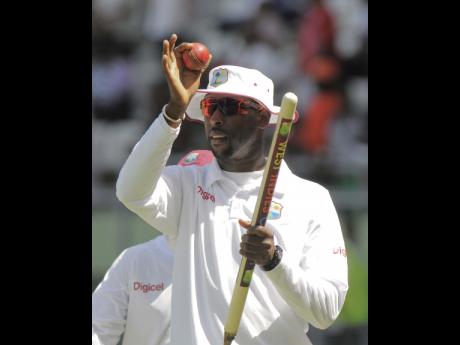 St Vincent and the Grenadines, replying to Dominica's 232, were dismissed for 205 just before tea on the rain-affected second day in the final round of matches.

Sunil Ambris led the charge to overhaul Dominica's total with a top score of 48, but Shane Shillingford and Kevin James combined for a five-wicket haul between them that stifled the homeside's run rate.

Resuming from an overnight 88 for three, SVG were never allowed to settle in the face of tight bowling spells from Shillingford and James.

Ambris and Atticus Browne had produced the highest partnership of their innings - 45 runs for the second wicket - after losing opener Miles Bascombe without a run on the board.

Romel Currency rallied with an enterprising knock of 31, in which he attempted to hold the innings together sharing three important partnerships - 27 with Ambris, 34 with Gridron Pope, while a third stand with Keron Cottoy yielded 29.

SVG got 31 crucial runs from Alston Bobb towards the end of the innings but were involved in the two run outs - Dawnley Grant for 17 and Kenneth Dember for 10.

Shillingford finished with three for 64 from 30 overs with seven maidens, while James picked up two for 51 from 13 overs, with three maidens.

Dominica, who entered the final round eight points clear at the top of the standings on 35 points, ended the tournament with 41 points to SVG's 33.

In the other match at the Sion Hill Playing Field, rain frustrated St Lucia's chance of beating Grenada and moving higher up the table.

Resuming on 192 for seven after dismissing Grenada for 98 in their first innings, St Lucia lost two quick wickets, to close the innings on 196 for nine since Keddy Lesporis was unable to bat.

Dornan Edward was not out on 24, while Denis George finished with six for 63, and Derron Hypolite three for 47 for Grenada.

Armed with a 98-run lead, St Lucia were hoping for better weather, but the rain stoppages favoured the Grenadians, who reached 108 for four, with Devon Smith unbeaten on 42 and Emmanuel Stewart 20 not out.