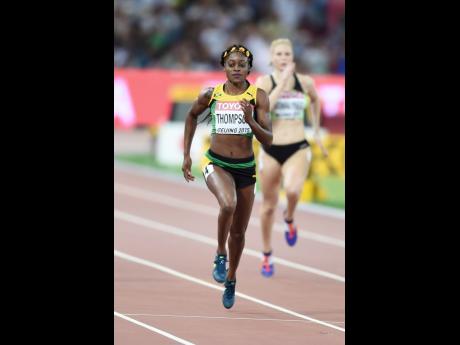 Gold medal hopeful Elaine Thompson says she is excited and focused on doing well at what is her first appearance at the World Championships, noting ahead of the 200m final that she is growing in confidence after each round.

Thompson added that she has made a special effort not to let the occasion get to her, and though she has impressed in her two races to date, the sprinter isn't ready to count her eggs before they hatch as she prepares for the biggest race of her young career and focuses on properly executing her races.

"I am excited! It's, of course, my first World Championships individual 200m appearance. It's been a good experience, and all I've been doing is following my coach's instructions to advance to the final," she said.

Thompson was again impressive in her semi-final win, shutting off the engine with 50 or so metres to go, stopping the clock at 22.13 seconds making her the second-fastest qualifier going into today's final. She got the better of American Candyce McGrone, 22.26, and Bulgaria's Ivet Lalova-Collio, 22.32.

"It was okay, a comfortable run. I didn't want to blow out so fast, just wanted to get to the final," said Thompson, who seems primed to dip below the 22-second barrier when she gets going in the final.

"I'm excited, but let the day speak for itself. It would mean a lot to me to get on the podium, I have been watching these guys since I was small, so it would mean a whole lot," said Thompson. "It's a big day, so let's see what happens."

Two other Jamaicans contesting the final are Veronica Campbell-Brown and Sherone Simpson.