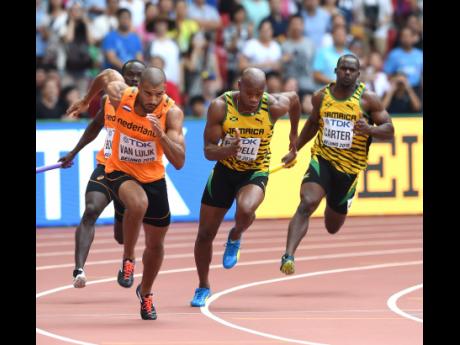 Ricardo Makyn
Asafa Powell and Rasheed Dwyer and Nesta Carter made up the team which was led by Nickel Ashmeade to a season best 37.41 with smooth baton changes to cement themselves as favourites for the gold medal. 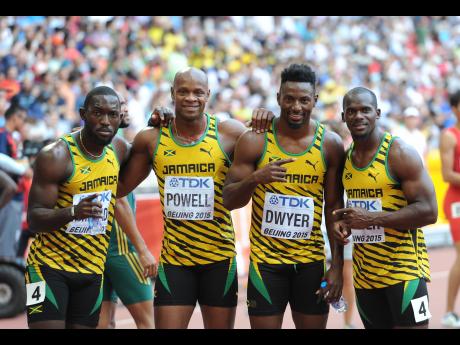 Ricardo Makyn
Ashmeade, Powell, Dwyer and Carter ... ran a season best 37.41 with smooth baton changes to cement themselves as favourites for the gold medal. 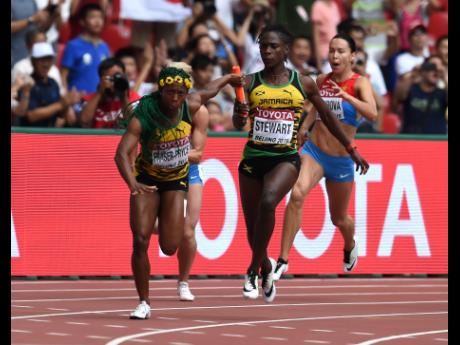 Ricardo Makyn
Shelly-Ann Fraser-Pryce on anchor collects the baton from Kerron Stewart to take Jamaica to first in teh 4X100m heats.
1
2
3

Jamaica's 4x100 relay teams have advanced to the final in fine form after recording impressive times in the heat.

Sprint darling, Shelly-Ann Fraser-Pryce anchored the women to 41.84 seconds - the fastest time in the world this year - to secure a spot in the final slated for Saturday morning at 7:45.

Sherone Simpson, Natasha Morrison and Kerron Stewart were the other members of the team which beat Great Britain and Northern Ireland and Canada.

Silver medallist in the 200m, Elaine Thompson is expected to be a part of the team which will run in the final.

Veteran, Veronica Campbell-Brown may also come in the team for the final.

In the men's equivalent, Nickel Ashmeade came in at the last minute to anchor after Tyquendo Tracey twisted his ankle during warm-up.

Ashmeade led the team of Nesta Carter, Asafa Powell and Rasheed Dwyer to a season best 37.41 with smooth  baton changes to cement themselves as favourites for the gold medal.

The final of the male sprint relay will take place on Saturday at 8:10 a.m.

Sprint double 2015 World Champion, Usain  Bolt is expected to be drafted in.

Jamaica has won the event at every World Championship since Berlin in 2009.