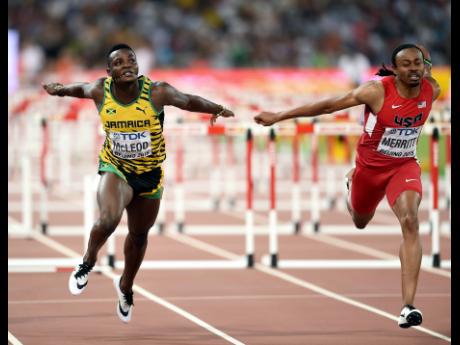 Jamaica's 110m hurdles finalists, Omar McLeod and Hansle Parchment, will both be looking for improvement as they go in search of Jamaica's first gold medal in this event at the World Championships.

The pair enter today's final at the 2015 World Championships in Beijing, China, as the third- and fourth-fastest qualifiers heading into the medal round. However, none was particularly pleased with their performance and are well aware that a medal in what has been one of the closest races this year, will most likely not come their way unless

McLeod, the fastest hurdler in China, this year, after his 12.97 run at Jamaica's national championships a few weeks ago, showed no mercy towards the hurdles in his semi-final, hitting all 10 on his way to a 13.14 second-place finish. This followed early problems in his heat and despite taking solace in his ability to remain focused even when the race has fallen apart, McLeod is aware it's the hurdler with the least mistakes who is likely to win.

"I'm going to do my very best to have a clean race, I want to do well for myself, my country, and my family so I'm trying to prove that I can do great things against these big boys," said McLeod. "Coming this young, is an exception, I have nothing to lose. I just need to go out there and run my race, run the same race I have been running all season and once I do that relaxed, great things will happen."

"It (the ability to recover in bad races) shows that I'm strong, so I'm happy that I have something to work on. Hurdles is something you have to be technically sound in. I think it's going to boil down to who has the perfect race because I think everyone is going to be up there, I'm just focusing on getting out, holding it together," McLeod told The Gleaner.

"It would mean everything to win a medal here, it would be exceptional! Coming here as a 21-year-old, medalling. I mean making the final is a great thing but medalling would be the icing on the cake and I really think I can do it. I have trained hard, the focus is there, the exuberance is there," McLeod beamed.

Parchment, the Olympic bronze medal winner, who was second in his semi-final with a 13.16 mark, said he is looking to improve his focus at the start as he expressed confidence in his chances of winning here.

"I am very happy that I got through, but I'm very disappointed with the first part of the race it was a very slow start, I don't think my mind was in the right place but I'm into the final and I'm very happy about that," Parchment said.

"I think I was thinking about the start or about getting out too much so when the gun went off, I was still thinking and then I realised its time to race. I need to focus and not worry about these things and just leave it on the track," he added.