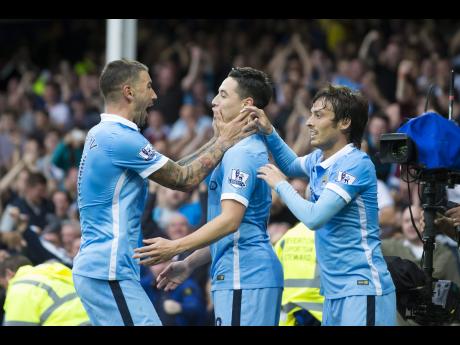 John Terry ended last season as still the best centre back in the English Premier League.

Three games into the new campaign, the Chelsea captain's stock has fallen to such an extent that critics are questioning how much longer he can cut it at this level.

The 34-year-old Terry has endured a miserable start to Chelsea's title defence: Substituted at half-time against Manchester City. Sent off against West Bromwich Albion. Now suspended for the visit of Crystal Palace on Saturday.

It will be the first time in 17 months that Terry has missed a meaningful Premier League game - he played every minute last season - and leaves Chelsea without any of the so-called "old guard" that has been the backbone of the club's success for the past decade.

Central midfielder Frank Lampard left at the end of the 2012-13 season, centre forward Didier Drogba's second spell at Chelsea ended in May, and Petr Cech was sold to Arsenal in the offseason. Terry is the last remaining link to the past in a new-look Chelsea team under Jose Mourinho, but his days could be numbered.

It's not just Terry's form that is putting his place under scrutiny. He will be 35 in December so age is not on his side, and Chelsea's pursuit of Everton centre back John Stones signals that Mourinho is looking to the future. Chelsea has reportedly had three offers for Stones rejected, and is weighing up a fourth potentially worth £40 million (US$62 million).

Terry still has much to offer Chelsea and could have two or three more years at Stamford Bridge. But his role could be changing, and good performances by Gary Cahill and Kurt Zouma - the likely centre-back pairing against Palace - will give Mourinho some thinking to do over the international break.

By then, Stones may be a Chelsea player, too. He has already put in a transfer request at Everton.

Chelsea has had as uncomfortable a start to the season as Terry, with four points from a possible nine leaving the team already five behind Man City. Palace have won two of their opening three games and are a dangerous team away from home with their pace on the counterattack.

Wayne Rooney's 10-game scoring drought for Manchester United ended with a hat-trick against Bruges in a Champions League qualifying match on Wednesday, but he'll need to start netting in the Premier League to get the critics completely off his back.

Rooney has been part of an underperforming United attack that has struggled to create chances, let alone score goals in the league this season. The team has scored two goals in three games, one of them being an own goal.

Manchester City will break their century-long record for successive top-flight wins if they beat Watford at Etihad Stadium.

City are the only team with a 100 per cent start to the season after beating Everton 2-0 on Sunday. That was City's ninth straight win, matching the club record that has lasted since 1912.