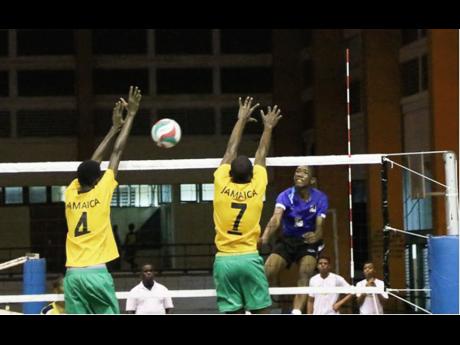 Contributed
Barbados Brandon Callender (right) hits past Jamaica's blockers as the defending champions beat the hosts 3-1 on the opening day of the 2015 CAZOVA Under-19 Volleyball Championships at GC Foster College, Spanish Town, St Catherine, on Thursday.

Defending champions Barbados got their defence off to a winning start at the 2015 CAZOVA Under-19 Boys' Volleyball Championships with a hard fought 3-1 victory over host country Jamaica at the G.C. Foster College in Spanish Town, St Catherine, on Thursday.

Barbados won 25-22, 14-25, 25-23, 25-22 in a close game against hosts Jamaica. Offensive hitter Brandon Callender with 15 spikes was among the standouts for the defending champions, who were marginally more consistent than the home team, winning 92 points overall to Jamaica's 89.

For Jamaica, middle blocker Javarie James and Jovan Thomas each with eight spikes and Shavar James helped keep Jamaica close, but were unable to get their team over the hump.

Tyrique Nicolas racked up 15 spikes from 30 attempts, while Rashaun White chipped in with eight as the Trinidadians won a see-saw battle against the Haitians.

"We took a little too long to adjust to Haiti's style and the size of the court," said winning coach Gideon Dickson, who explained that his team prepared in a much smaller venue to the expansive auditorium, which took some getting used to.

Dickson added: "It was good to get the win. It wasn't the prettiest of wins, but we are thankful nonetheless."

He also lauded a number of his players.

"Our captain Rashaun had an outstanding game. Our opposite player Tyrique Nicolas had a good game, but he could have done a little more. The setter, who is really the engine of the team, made too many unforced errors in the first part of the game. He was setting good balls at times, but some of the balls were too tight. So it didn't give our attackers an opportunity to really go at them."

He believes the team will improve as the tournament progresses.

Haitian coach Adolphe Rudolph said the team had problems receiving and attacking, declaring that he had already identified the problems and will make the necessary adjustments for the next game. He said he will also try to motivate the team by reminding the players that they are doing this for their country.