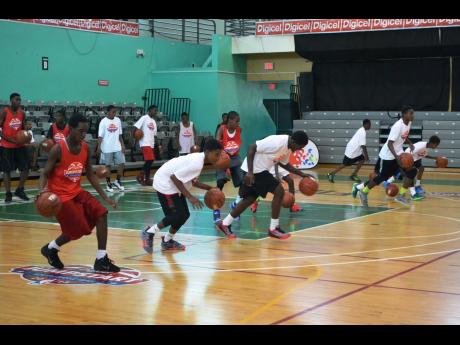 Contributed
Participants dribble the ball at the Digicel Jumpstart Clinic launched in the British Virgin Islands (BVI). The islands best basketball players were put through their paces by NBA-certified coaches.

Young basketballers from the British Virgin Islands (BVI) showed tremendous skill and class during the Digicel Jumpstart Clinics, which visited the island for the first time this week.

As the aspiring young players ran up and down the court at a frenetic pace, the official NBA coaches were impressed by the athletes' level of technical ability and basketball IQ.

"The boys were smart, fast and very athletic. They played a fast-paced style offense, but were still technically sound and kept to their fundamentals," said senior director of international basketball operations at the NBA, Troy Justice.

He added: "The point guards were instinctive and distributed the ball all around the court. We were impressed."

The local basketball coaches in the BVI were also given an opportunity to learn and share ideas with the NBA coaches.

"It's always good to share ideas with other coaches," Justice commented. "The coaches were open to learning new ideas, both offensively and defensively. I also bounced some ideas off them and learnt a bit myself. It was my pleasure working with them."

The Digicel Jumpstart Clinic is a once in a lifetime opportunity for young players to showcase their talent and learn from official NBA coaches. It also teaches importance of work ethic, values, proper sports-manship and motivates children to be the best they can be on and off the court.